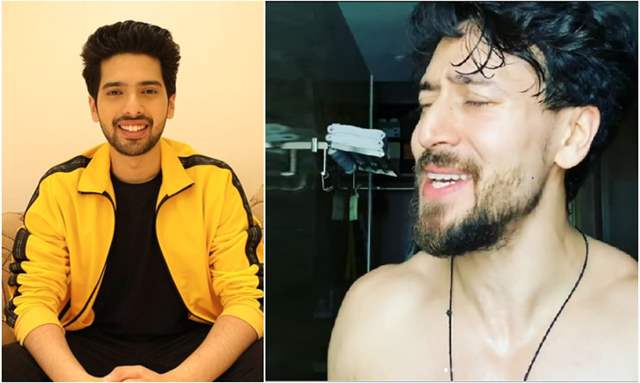 Tiger Shroff is an actor who can  ace anything and whatever he does has his full dedication. Tiger ensures to give in his all even for the smallest thing as that's how he aces everything with great level of precision be it dancing, never seen before action skills and even singing.

The actor recently shared a video of him singing and appreciating his talent in a recent interview, Armaan Malik shared, “I loved it! To be honest, there are very few actors who can sing well. Tiger I never knew could sing until I heard 'Theher Jaa' and 'Jab Tak'. I could see it in Tiger's voice he is feeling every lyric that he is singing and at the end of his tone he used to do this vibrato which probably is a natural gift to him.”

The singer further added, "I don't know how that came. That whole quivering of the voice at the end of the line which is very rare. I was blown away and was like “Tiger Kuch to chod do". He's  amazing  at everything! He's amazing at dancing, action, and now even singing!"

The singer was completely in love with the actor's melodious voice. Thanking Armaan Malik for such a great response, the actor took to his social media and shared, “Means a lot coming from bilboards number one artist????"

Tiger’s latest film Baaghi 3 broke all records doing extremely well and had minimal or almost no use of VFX and the audiences were completely stunned. The film also recently released on OTT and was loved by all.

Even during this time of lockdown, the actor is still constantly working for his upcoming projects through video calls and much more ensuring to make most of his time and not wasting it.

The actor is all set to wow the audiences once again with his upcoming film Heropanti 2 which is a sequel to his debut. Hold on tight as the Tiger is sure to roar loud this time as well.