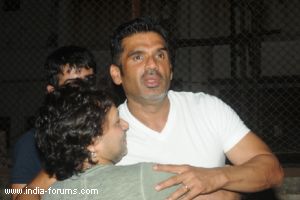 A string of actors and singers congregated on a common pitch here to play a friendly T20 cricket match as a pre-release buzz for forthcoming film "Desi Kattey".

The match was played on Friday night.

In the actors' team, led by "Desi Kattey" director Anand Kumar, were names like Suniel Shetty, Jay Bhanushali and Akhil Kapur, while in the singers' team, led by Kailash Kher, were Shaan, Meiyang Chang, Papon, Paresh and Naresh Kamath and Ravi Tripathi.

According to a source, everyone seemed to be in a jolly mood and winning or losing did not matter.

Kailash Kher said "this match will be remembered for a long time", while Suniel said: "I've been playing CCL (Celebrity Cricket League) since long, but this singers-actors match is amazing fun and I have told Kailash that we should have more of such matches."