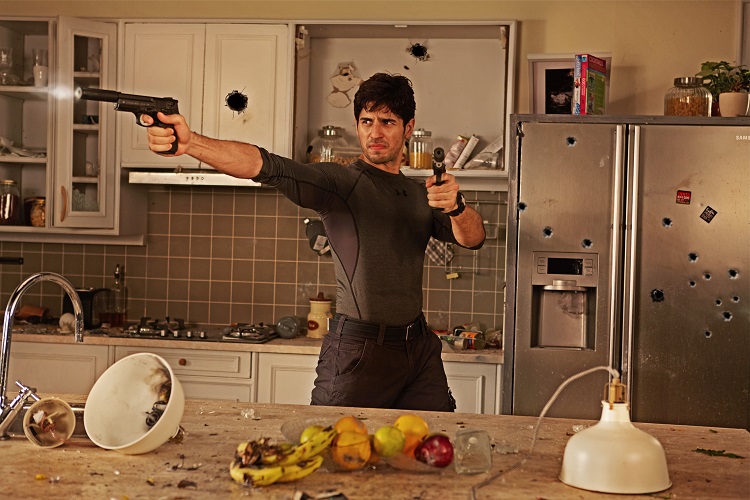 Sidharth Malhotra unveils yet another look from his upcoming film A Gentleman - Sundar, Susheel, Risky and this time it's full of action.
After treating the audiences with two different avatars of Sundar, Susheel Gaurav and risky Rishi we get to witness the badass Sidharth in an action packed avatar.
In this still, Sidharth Malhotra is seen shooting at will as he stands in a kitchen that is completely trashed given there has been a massive shootout!
The makers are making things really intriguing before the release of the trailer as we want to know more about what's the storyline of this quirky action thriller! Sidharth apparently plays the two characters - Gaurav and Rishi.
Gaurav being a homely gentleman living in US who likes to live within rules and doesn't even want to bend rules let alone break them and Rishi being a more risky, thrill-chasing, six-pack flaunting, Dashing Gentleman who doesn't mind shooting up some bullets.
Jacqueline's look as Kavya who plays the role of impulsive, emotional, all-hearted girl has also received immense appreciation.
The film will feature Sidharth and Jacqueline together in an action packed avatar.
Produced by Fox Star Studios, the film is directed by directors Raj & D.K and is all set to release on August 25th, 2017.
0 Likes

Jacqueline Fernandez talks about the Positive Side of the Lockdown, ...

Jacqueline Fernandez: It is Not Easy for Me to Confront People; ...

Jacqueline Fernandez opens up about honing her skills during the ...

Queen.Of.Heartz 3 years ago Waiting to see you back on the big screen, Sidharth Malhotra

Sushant’s Brother-in-law Messaged, ‘Please Keep My Wife Away ...
9 minutes ago

Tinaa Dattaa to make her digital debut with 'Naxal'!
23 minutes ago

Amitabh Bachchan Gives a Sharp Reply to Troll Who Accused ...
44 minutes ago

Smule and Radio Mirchi bring you India's Freshest Friendship ...
an hour ago

Lawyer reveals Rhea Chakraborty was struck off from the list ...
an hour ago
View More
TOP