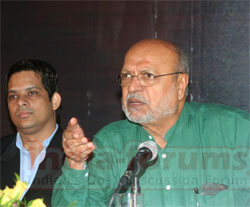 Deviating from his brand of films on serious subjects, renowned filmmaker Shyam Benegal is now gearing up to make a comedy for the first time in his illustrious career. The film titled ‘Mahadev ka Sajjanpur’ is a take on the modern Indian villages where gadgets like the television and cell phone are no more unique substances.

Shooting of the film is complete and Benegal plans to release it soon. The cast of ‘Mahadev ka Sajjanpur’ includes Shreyas Talpade of ‘Iqbal’ fame and Amrita Rao in the lead. The story of movie revolves around a freelance letter writer at a village post office and makes an attempt to invoke the urban audiences’ interest in the present day village life.