Featured Video
It's the week to Hip-Hop and Waltz, and Prachi Desai and Deepak waltz on the number "O mere sapno ke saudagar mujhe aisi jagah leh jaa". The couple translated their dance through a fabulously choreographed fairy tale Cindrella act! From the dance, look, feel, with no exception to the shoe, their act was completely outstanding. This isn't just what we say...here's what the judges had to say –

Special guests Rishi Kapoor says, "Cindrella concept bohot behtareen tareeke se use kiya hai" and Neetu Kapoor said "I have seen you dance in the last 2 weeks and you are terrific"

An excited Prachi told the Kapoor's, "I'm waiting to see your son Ranbir too"

Watch Prachi dance like Cindrella with her prince charming Deepak this Friday, October 26 at 9.00 p.m. only on Sony Entertainment Television.


Where are the kisses? Anil Kapoor asks Sandhya

This week Sandhya Mridul and Javed danced to the evergreen romantic number "Kuch Na Kaho" from Anil Kapoor's hit movie 1942 – A Love Story, which resulted in Anil becoming nostalgic. He reminisces the shooting of this song with his co-star Manisha, who had him do multiple retakes due to her overweight. On Sandhya's performance Shaimak said, "Tumhara jalwa aasman main udh gaya, tumne mera naam roshan kar diya" Anil said, "It was beautiful but you missed out on the 22 kisses"( the number of kissing retakes that Anil had taken while shooting this song). An embarrassed Sandhya reacted by saying, "Woh aaj meri maa aayi hai mujhe dekhne ke liye, isliye" This quick repartee could be expected from Sandhya!

After her waltz, Sandhya had Anil Kapoor join her to the music of "one two ka four…to my name is lakhan" Although he has not been in his dancing shoes for ages, Anil left all his inhibitions to shake a leg with Sandhya. Anil to the pleasant surprise of everyone, thoroughly enjoyed dancing with her and was in complete synch with the energetic Sandhya.

So don't forget to tune tonight to Jhalak Dikhhla Jaa —Dancing with the Stars to watch the stars tonight at 9:00 pm perform the waltz and Hip-Hop.

This is no Mr. Bajaj or Mihir Virani…- There is only Ronit Roy, the Perfectionist!

You have seen him as the suave & charming Mr. Bajaj and the kindhearted Mihir Virani. That's Ronit Roy for you. But on Jhalak Dikhhla… you see a different Ronit altogether. Ask Nicole his 19-year-old partner. The smiling teenager finds the popular soap hero far too strong to handle!

If you think the choreographer is the one to teach the star, here is another story. Ronit, himself a passionate dancer, wants every move to be perfect, every turn & twist to be in sync…and that's not tough for Nicole, but Ronit as a taskmaster frightens the life of this teenager who had chef Sanjeev Kapoor, last season actually eat out of her hands!

Will Nicole manage the taskmaster Ronit Roy...will they survive the elimination this Saturday, October 27 at 9.00 p.m. only on Sony Entertainment Television. ...Stay tuned!

It's not always that you have two mega dancing stars on one stage! After over a decade or so veteran actor and dancing star Jeetendra, one of the prominent judges of the popular dance format shows, Jhalak Dikhhla Jaa -Dancing with the Stars, was on the dance floor with Rishi Kapoor, the chocolate hero of the 70s & 80s.This was on the sets on Jhalak…when Rishi Kapoor & Neetu Kapoor came as the special judges on the show.

The two actors simply broke in to an impromptu dance to the delight of the participants, judges and the studio audience. They literally ignited the stage with their jugal bandi and to further burn the stage the beautiful Urmila Matondkar joined in.

Watch Rishi Kapoor & Jeetendra do a jugal bandi this Friday, October 26 at 9.00 p.m. on Sony Entertainment; the dance will sure leave the audience's saying " yeh dil mange more". 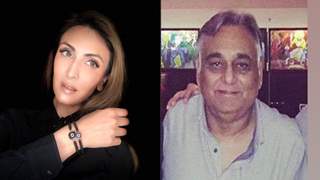 14 years ago prachi looks just like an princess everyone pleeeze vote 4 her.

14 years ago Pleasee vote for Prachi. She is awesome!!!

14 years ago rishi kapoor and jeetendra so cute..thanks for the article

+ 2
14 years ago totally agree with u *sweet-soni*
i can vote cuz i live in usa..but india get ur cells and start dialing for prachi...01 is her code..lol..i cant wait to watch her performance..she must do a fab job with all the comments shes told...and i luv her dress she looks so preety...and cute

14 years ago woohhooo go prachii.. plz vote for her as i can't vote becuase i live in canada !!

14 years ago Thanks for the glimpse into tonight's episode, looks like a fun episode, can't wait to watch it!

14 years ago Wow... Barason ho gaye Jeetu ji ke dance kiye hue nahi... And he seems to do a damn good one in the show... She always has.. Am very eager to watch him, Anil and Urmila burn the dance floor as said

+ 2
14 years ago awww jeetuji is dancing and prachi luks too cute...I cant wait to see ranbir either prachu