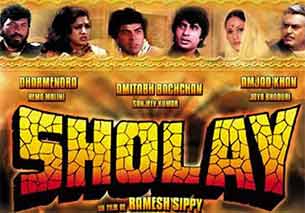 Contrary to the normal belief that cult film "Sholay" belongs to its scriptwriters Javed Akhtar and Sailm Khan, the writers say it is the other way round as the film is promoting them even 38 years after its release.

"I don't generally watch my old films, I get embarrassed. But yesterday I saw 'Sholay' again. When you see your old movies, meet old friends, there is a kind of nostalgia and sweetness in it," Akhtar told reporters Thursday at the trailer launch of "Sholay 3D".

"These kind of films happens only once in a century. 'Sholay' doesn't belong to us, we belong to 'Sholay'," he added.

Salim Khan said: "Yes, as Javed rightly said, 'Sholay' is still promoting us, even after so many years."

Javed Akhtar also thanked late G.P. Sippy, who produced "Sholay", which made new records when it came out in 1975.

He said: "I must thank G.P. Sippy, who used to think out of the box. He was the captain of the ship. He was a big-hearted person and a gambler. The film would have never been made without him."

"Sholay" has now been converted into 3D and it will come out in the new form Jan 3 next year.

Before Death, SP Balasubrahmanyam Has Sung For Upcoming ...
59 minutes ago