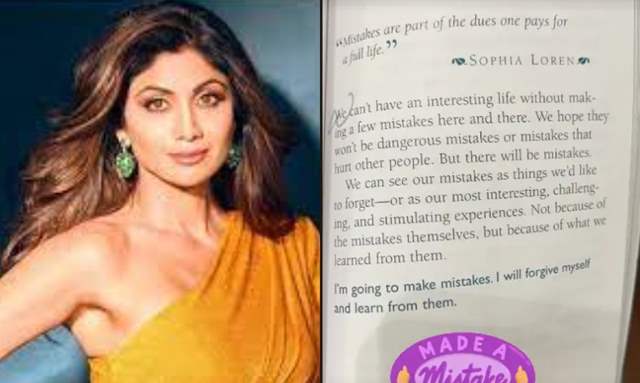 On Thursday, Actress Shilpa Shetty admitted to making a mistake with a cryptic note, which she shared on her social media. Recently, Shilpa Shetty is communicating through book quotes amidst an ongoing controversy in which her family is involved. Shilpa's husband, businessman Raj Kundra, is being investigated for alleged involvement in a pornography racket and was recently remanded in judicial custody for several days.

Shilpa Shetty's Instagram Stories excerpt appears to be from the same book that inspired her to share a couple of other images from it. It starts with a quote from Sophia Loren which reads, "Mistakes are part of the dues one pays for a full life."

The quote further reads, "We can't make our lives interesting without making a few mistakes here and there. We hope that they won't be dangerous mistakes or mistakes that hurt other people. But there will be mistakes. We can see our mistakes as things we'd like to forget or as our most interesting, challenging, and stimulating experiences. Not because of the mistakes themselves but because of what we learned from them."

"I'm going to make mistakes, I will forgive myself and learn from them," the note concluded. The Hungama 2 actress also added on a sticker that said, "Made a mistake, but it's okay." It was unclear to what mistake Shilpa was talking to.

The star also shared a book quote, previously,  that highlighted the importance of not pausing due to adversities, and continuing to live fully even if 'life becomes stressful'. "Live every moment,” her sticker stated.

Talking about work, Shilpa Shetty recently returned as one of the judges on Super Dancer Chapter 4, after a long break of 1 month. The actress was also seen in the film Hungama 2 which was released on Disney+ Hotstar.