View Profile
Stars are only considered as stars while they are on the news and as far as B-town glam gals are concerned, their stardom keep going up and down like bubbles in the water. Now take for example of Shilpa Shetty who, for sometimes, was a hot cake for almost the whole world but soon the bubble blasted and she sank into the unknown zone for a span of time. 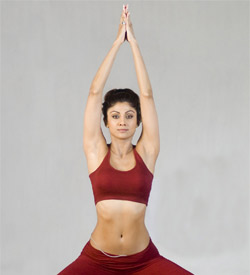 
Around two years back it looked like Bollywood star Shilpa Shetty would soon be faded out. But the hotty babe regained her shine after the controversial Big Brother issue happened to her. Since then Shilpa has never looked behind, well, for a few months though. Her filmy career had yet taken off again while she started bagging commercials and was also seen in her much talked Yoga album which was been released by Shemaroo.

Now the fans of this Bolly-babe will have easier access to her glaring beauty as Shemaroo has tied up with different mobile service providers wherein her crazy fans can download the assans posed by Shilpa directly on their mobile. So, it’s time to get ready and press a button to stay at the best of your health and that even with a glitzy babe as your teacher.

But, wait a minute! Wouldn’t it be difficult to concentrate on exercising with eyes on this perfectly shaped bombshell all the while? Well, there’s, we guess, no need to care for such minute things as you just can press a button, wait and watch a beau like Shilpa posing for yoga on the smallest screens in your hands!