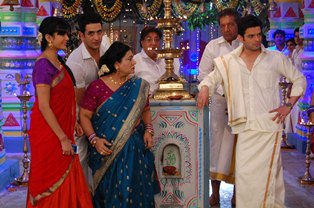 Star Plus' show Ye Hai Mohabbatein along with its unique and interesting story track also has interesting characters that bring out different shades to the show. With Raman, Ishita and Ruhi being the focal point of the show there are others who are adding stir in their own distinctive way. We are talking about the bubbly and fun loving Mrs. Bhalla played Shenaz Rizwan. Not many know that Shenaz is a Pakistani who hails from London.

The actress off lately is very excited about the high point of the show which is Raman and Ishita's wedding. The reason we hear is that she has keen interest to learn the desi wedding rituals that have been incorporated in the show. All thanks to her on-screen character that has now given her a chance to not only see but be part of all the fun, celebrations and ceremonies attached to a big fat Indian wedding.

An enthusiastic Shenaz says, "I'm looking forward to all the upcoming episodes as I have always wanted to experience an Indian wedding. We are having so much fun shooting for the wedding sequence and to top it up this will be a fusion of North and South wedding. I guess I'm really lucky to witness both in one go (smiles)."

Shenaz has been acting since she was six and has won many awards. She has been very passionate about Indian cinema and television seems to attract her the most.

Divyanka Tripathi and Karan Patel rocks. Their chemistry as Ishita and Raman is sizzling...

+ 2
7 years ago Yeh hai mohabbatein. Us rocking. These days. Loving it.
shenaz ji u r fit. As mrs.bhalla.

7 years ago Shenaz Rizwan is too good as Mrs. Bhalla in YHM! You are doing a great job. Keep rocking!!

+ 6
7 years ago Loving and Living each and every episode of Ye Hai Mohabbatein to the fullest.

Ye Hai Mohabbatein never fails to impress me. The characters of YHM indeed are made for the roles!

+ 2
7 years ago Shenaz rizwan is mind-blowing as Mrs Bhalla...
Divyanka and Karan are PERFECT together !
yeh hai mohabbatein rocks !

7 years ago Shenaz rizwan is perfect as Mrs Bhalla...yeh hai mohabbatein is a lovely show.