After asking actors to quit smoking on screen, the Minister took Bollywood head-on over alcohol. It may be mentioned that on Wednesday, Ramadoss had pointed out that movies were frequently showing 'drunken' scenes as a tool of humor. 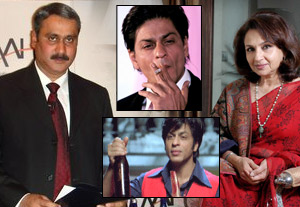 
He specifically targeted Shah Rukh Khan's rendition of a drunken junior artist in the movie, 'Om Shanti Om'. Ramadoss lashed out at actors portraying scenes of consuming alcohol to drown their sorrow. He had expressed pity that these actors have been idolized by the country's young and old.

When quizzed about the Union Health Minister's stance on the issue of alcohol, Sharmila Tagore said, "First it was about smoking, then he spoke about chips and now alcohol. I think what is primarily very important now is that he should focus on real issues like fake medicines. There are a lot of drugs that are fakes and it's a known fact, which is actually causing a lot of problems."

While Sharmila Tagore's ire against the Health Minister isn't that unexpected, especially after Ramadoss took a dig at her son, Saif Ali Khan, for endorsing Lays Chips and even went to the extent of citing the actor's heart attack in relation to his brand endorsement.

With SRK taking potshots at the Minister and Sharmila Tagore also making her ire public, it looks like that the Minister's popularity stakes in Bollywood are declining.