Shamin Mannan who is seen in the two shows of Shakuntalam Telefilms, Star Plus' Santaan and Zee's Banoo Main Teri Dulhann has taken ill and was reported to be critical recently. 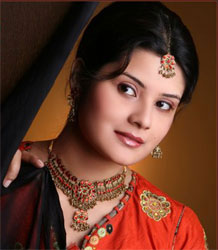 Featured Video
Shyamashis Bhattacharya, Producer, Shakuntalam Telefilms says, "Yes, Shamin is not feeling well, but I have no idea what is exactly wrong with her. Her character of Neha in Santaan will be replaced, while in Dulhann we are not working on her track, so will keep her out of the story till she gets back".

According to Pooja, Creative Head of Santaan, "The character of Neha was important as the track was very much around her. So we had to go for a replacement, and Shweta Barupal who plays the role of Deepika in Chhoti Bahu will be entering soon".

We called Shamin's number hoping that we could get more about her condition. Fortunately, a relative of the actress answered our call and accepted that Shamin was very ill. "She had a severe food poisoning that has weakened her a lot. She has been advised by the doctors to take complete rest for another 2-3 weeks. We have informed the production house and the channels. Let's see whether they wait or not", quoted the relative.

On asked about Shamin's present condition, he said, "She was in the hospital, but has been discharged now. She is on the road to recovery, but it will take some time before she gets back to acting again".

In Dulhann, Shamin played Aditi, the wife of Bharat Singh aka Mohit Mallik. In Santaan, she played wife to Shubh (Gaurav Khanna) and suffers from acute memory loss and does not identify even her family and husband.

Well, we wish the actress a speedy recovery and hope to see her back in Dulhann at least, in the near future!!

13 years ago Please let Shamin know that we want her to get well soon and come back to the Dulhann sets as Aditi.....we really miss her and want her to come back.

glamgirl08 13 years ago I pray that she recovers soon..
But SHweta Barupal is sure to rock....
She is more pretty and hott..

+ 5
13 years ago no wonder why!! I MISS HER!!! She is awesome!! Shamin get better! WE LOVE YOU!!!! We want you back in Dulhaan ASAP!!!! ONLY YOU! Not another girl thinking she can take the role of Aditi. Aditi is only YOUR role! Get better as soon as you can! You have our well wishes!!

btw: CREATIVES if you read this: PLEASE dont even THINK of replacing her in Dulhaan less you want trps to go down! WE WANT ONLY SHAMIN!

ps..sorry if this was rude or uncalled for! Forgive me! I just dont want to loose Shamin as Aditi. I can wait for her to get better. you can side track her in dulhaan, but DONT REPLACE HER! Please!!!!!

13 years ago i was scared, thinking she was replaced for BMTD. but thank god. cause i love her as aditi. :)

13 years ago I wish her a speedy recovery! and hope she''ll be back in dulhan soon.

13 years ago I hope she gets well soon! Miss her in BMTD