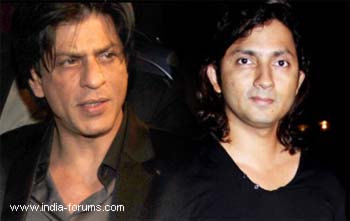 There are versions galore -- but Bollywood Badshah Shah Rukh Khan's alleged brashness towards filmmaker Shirish Kunder has left everyone startled. A lot is being said about their scuffle, but what exactly transpired is still a mystery.

Shah Rukh himself tweeted Tuesday: "Reading stuff and watching tv... Feel like I am the source & author of a Shakespearean farce... without the poetry or the prose of course!!!"

Shah Rukh allegedly roughed up editor-filmmaker Shirish, the other half of his former friend Farah Khan, in the wee hours of Monday morning during Sanjay Dutt's success party for "Agneepath(2012)".

According to sources from the party, while guests were having a ball, at around 4.30 a.m., Shah Rukh entered the venue straight after the Filmfare awards with three of his bodyguards. He headed towards Shirish and roughed him up.

An eyewitness recalled: "We didn't know what was happening. We saw SRK enter. Then we saw him head towards Shirish from behind the director. SRK pulled Shirish down to the ground by his long hair. We were all shocked. We had never seen SRK behave this way before.

"Before anyone could react, Baba Dewan the owner of Aurus ran in and intervened. SRK told Dewan to keep out. Dewan said the place belonged to him and he must intervene. The fight would've been prolonged had Sanjay Dutt not pulled SRK away from the ugly scene."

A source close to Shirish gives a different take, saying: "Shah Rukh was smarting since Kunder made a sarcastic comment on SRK's 'Ra.One' when it released. But the immediate provocation was apparently a comment that Kunder made about SRK and Priyanka Chopra at the party that SRK overheard. But that is hogwash. Kunder didn't say anything about Priyanka. Why would he? Everyone was there to celebrate a success, not to create ugliness."

Farah, who was not present at the party, and was busy shooting for her acting debut "Shirin Farhad Ki Nikal Padi", was the first to talk about the fight. She was upset with the incident between her husband, and once thick friend Shah Rukh.

"Shah Rukh has always told me that physical abuse is the worst way to sort out a problem and that it means the person who is hitting has either a professional or personal crisis going on and it saddens me to see him doing the same," Farah said in an official statement Monday.

Farah and Shah Rukh were close friends - so much so that he didn't hesitate before giving a nod to her 2004 directorial debut "Main Hoon Na". It turned out to be a success, after which the duo repeated their success with "Om Shanti Om" in 2007.

So far only Farah has spoken out against SRK's act, which perhaps happened while he was in an inebriated state, while Shirish took to Twitter to clarify that neither an FIR, nor a police complaint is being filed in this regard.

Surprising as it may seem, several of the superstar's fans and colleagues are hailing Shah Rukh for it.

"I know Shah Rukh since 'Baazigar' days. I know him as a well mannered, professional person. He is the finest gentleman from the industry. Unless someone provokes him to do something, he will not take any action. I give SRK the benefit of doubt," filmmaker Anant Mahadevan, told IANS.

Popular celebrity photographer Dabboo Ratnani, who was present at Sanjay's party, said: "All I can say is that I support SRK 100 percent and beyond that, I don't wish to comment on this."

Actress Ameesha Patel was all praises for Shah Rukh.

She tweeted: "Shah Rukh is super rocking... Good he gave it to Shirish. People should learn to be grateful to King Khan, after all he has been so supportive to Farah. Glad @iamsrk told Shirish off and put him in place. SRK has done so much for Farah. They should be grateful and not abusing SRK.

"People keep taking digs at @iamsrk and he continues to keep a dignified silence. But he is human and will also feel insulted. @iamsrk is too dignified and would never do anything unprovoked... he is too classy and a thorough gentleman."

However, television actor Aman Verma took to Twitter to express his disappointment at the course of events saying: "Sad to see the reports in the paper about the SRK-SHIRISH scuffle... An industry, which promotes living in peace, has come down to this."

The news of the fight has ignited fires on social networking websites, where people are sending out jokes and one-liners, hailing King Khan.

A certain mohit_ak mohit wrote: "This is probably the only time "Shirish Kunder" has got so much attention ever since marrying Farah Khan #slapgate"