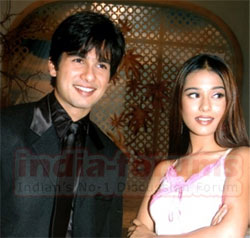 It was time again for on-screen sweethearts Shahid Kapoor and Amrita Rao to get together when Sooraj Barjatya invited them to share their thoughts on relationships, marriage and matters of the heart with viewers of Zee Cinema. Looking dapper in a suit, Shahid spoke freely when Zee’s Fresh New Face of the Year, ‘Dulhan’ Divyanka Tripathi asked him about his chemistry with Amrita and what makes the adorable duo spell magic on celluloid. Ravishing in red, Amrita spoke about the gala time the unit had while shooting for the film. Sooraj Barjatya only had words of appreciation for the talented duo and expressed a desire to work with them in the future. This lively interaction was shot at Mehboob Studio and will be aired as a segment called ‘Shubh Vivah’ during the Premiere of the Barjatya blockbuster, Vivah on Zee Cinema at 8 pm on Saturday, December Ist.