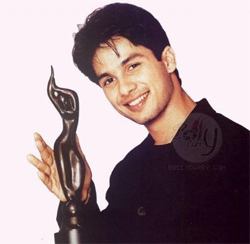 The 28-year-old is going to be presented with the 12th Rajiv Gandhi Award in the best actor category. The award function will be held in the second week of August.

'I was pleasantly surprised to get the news about my being chosen for the prestigious award. I am only 28 years old and it's really early in my career. I feel humbled and honoured to be chosen by the jury,' said Shahid.