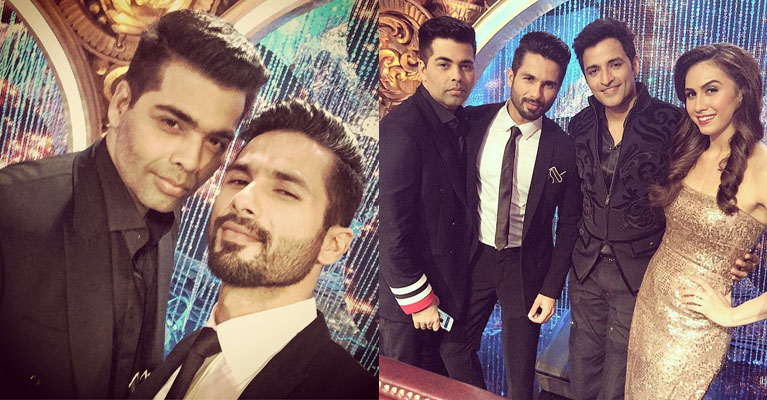 Bollywood actor Shahid Kapoor, who is judging the eighth season of "Jhalak Dikhhla Jaa" along with filmmaker Karan Johar, actress Lauren Gottlieb and choreographer-singer Ganesh Hegde, says that they have started shooting for the dance based reality TV show.

The first photograph shows him standing with Karan, Lauren and Hegde and Shahid captioned the image: "The reloaded version. Day 1 . #jhalakdikhlajaa".

The 34-year-old actor shared another photograph of himself along with Karan. The two were seen wearing a black suit.

"Having fun with kjo in a majo kinda way. On set #jhalakdhikhlaja," he wrote.

"All set for #JhalakDikhhlaJaaReloaded," Karan tweeted.

Lauren, who was last seen in Remo D'Souza's "ABCD 2", and would now be seen judging the show, tweeted: "Good news guys, I will be judging this season of #Jhalak, with these hunks @shahidkapoor @karanjohar #GaneshHegde".

The show is expected to go on air from July 11.

5 years ago Vivian Dsena
All the// best
keep rocking

+ 2
5 years ago OMG I am so looking forward to this new season! Shahid and Lauren judging omg this is too good. And the contestants are looking great too. :D

5 years ago Vivian Dsena! I hope youre healthy and fit and working hard for JDJ! Good luck!

5 years ago Vivian Dsena you are such a sweet person !!!
Stay Blessed...

5 years ago Good morning Vivian Dsena! I hope youre healthy and fit and working hard for JDJ!

5 years ago Vivian Dsena all the best
Keep sizzling.