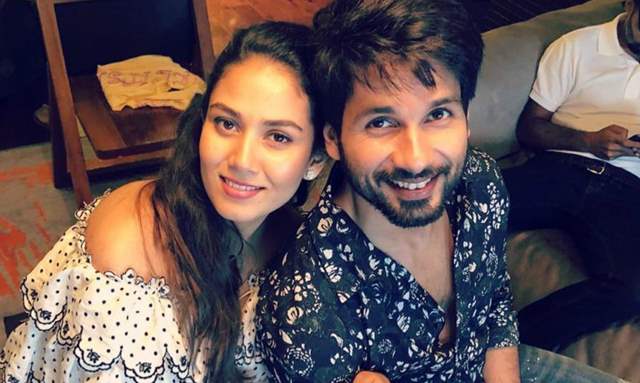 Bollywood actor Shahid Kapoor and his wife Mira Rajput Kapoor have always been in news not only due to their cute pictures with their kids, but also because the latter always falls prey to trolling. Not to mention the fact that the star couple has a 13-year age-gap between them. The duo who tied the knot in 2015 in New Delhi in an arranged marriage are proud parents to Misha and Zain.

Recently, the Kabir Singh actor attended the Jagran Film Festival in Mumbai where he openly spoke about his wife Mira Rajput Kapoor facing a lot of scrutiny and criticism from everyone not just for being a star-wife but also for her life choices.

The 38-year-old actor shared that Mira was an amazingly mature and an evolved human being because she was sure who she wanted to marry at the age of 20. He further went on to question about how many people would have the conviction to do such a thing, especially because no one has a clue what they want in their future when in their 20s.

As quoted by News 18, he said, “My wife is an amazingly mature, evolved human being who decided and was sure of who she wanted to marry at the age of 20. How many people have the conviction to do that? I think you spend your life well in your 30s like I have. I had no clue what I wanted to do in 20. It takes a lot of clarity and conviction even whether it’s work or marriage to decide that you want to do this at this stage in your life.”

Shahid went on to share the reason behind Mira wanting to become a young mother. He revealed that, “And, once we got married she was very keen to have both the kids early because her plan was a little different. Because she was like, ‘By the time I was 25, I’d be done being a wife, I’ve had both my kids and I’ve had time for myself.’ So, why should I be clarifying her choices? Why is everybody judging other people on their choices? Let everybody be who they want to be. Decide for yourself who you want to be and learn to respect who somebody else wants to be. It’s essential.”

Being a star-housewife is never easy and you easily fall prey to the scrutiny of the public. Shahid revealed that just because the world doesn’t know how Mira spends her days doesn’t mean that she just enjoys all the luxuries. As per Shahid, his wife has a busy day and she structures her day really well, so much so that he is always last on her priority list.

“Just because the world doesn’t know what Mira is up to doesn’t mean that she is not up to anything. She doesn’t need to announce it to the world because she’s married to an actor. She is not an actor. It’s not a part of her ‘issues’. She has a busy day and she structures her day really well. I’m always put last on her priority list because she has to find time for the children and she has to find time for herself. So, it’s not easy even managing so many things because there’s so much to deal with,” he said.

On the professional front, Shahid Kapoor was last seen in Sandeep Reddy Vanga’s Kabir Singh, the Hindi remake of his Telugu directorial Arjun Reddy which starred Vijay Deverakonda. Also starring Kiara Advani in the lead role, Kabir Singh went on to become Bollywood’s one of the highest-grossing movies in the year 2019.

SC questions Rhea Chakraborty regarding plea to transfer ...
5 minutes ago

Rhea Made Financial and Professional Decisions on Sushant’s ...
17 minutes ago

Thor actor Chris Hemsworth says, “I love the place and the ...
19 minutes ago

Sherrin Varghese marks his comeback with Aneri Vajani & ...
59 minutes ago