It was time again for on-screen sweethearts Shahid Kapoor and Amrita Rao to get together when Sooraj Barjatya invited them to share their thoughts on relationships, marriage and matters of the heart with viewers of Zee Cinema along with the host of the show, Zee’s Fresh NewFace of the Year, Dulhann’s Divyanka Tripathi in a segment called - 'Shubh Vivah.' 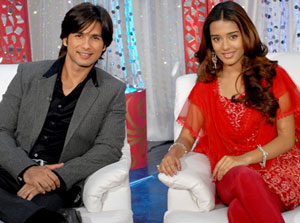 Featured Video
Shahid looking dapper in a suit and Amrita looking ravishing in red, the talented duo cast their spell, as they talked about their experience working with the great Sooraj Barjatya. Divyanka the host, had a gala time, as she got Amrita sharing her sweetest and most memorable moments from the sets of Vivaah. This lively interaction was shot at Mehboob Studio and will be aired as a segment called ‘Shubh Vivah’ during the Premiere of the Barjatya blockbuster, Vivah on Zee Cinema at 8 pm on Saturday, 1st December.


Divyanka, the host of the segment ‘Shubh Vivaah’ who looked stunning in red, shared her experience, hosting this special segment on Zee Cinema, with our reporter Hiral Anju Bhatt. “I am quite adventurous in real life, and when Zee Cinema approached me with this anchoring offer, I grabbed it with both hands. I had a gala time as an anchor; I was handed a script of over 7-8 pages in pure Hindi. I struggled to begin with, but then, I went with the flow and had an awesome time”, says Divyanka with a smile on her face. 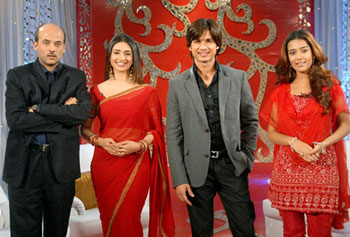 Talking about the experience with Shahid and Amrita, Divyanka says, “They are wonderful people. I didn’t have any opinions about them when I went to meet them, but then, after knowing them, I was pleasantly surprised.” Have you seen Vivaah? What is your take on the movie personally? “It was a brilliant movie, an adorable masterpiece by Soorajji, I would say. I loved Shahid and Amrita’s chemistry in the movie, and every scene in the movie was so beautifully shown.” Divyanka’s favorite scene in the movie is the scene shot by the river. “I even told Soorajji that I admired the way in which he shot the river scene. In any other movie, the actress would surely be found stripping off in the water, but in this movie, the scene was so elegantly handled with utmost priority given to purity”, says Divyanka..

Tune in to Zee Cinema at 8 pm, Saturday, 1st Dec to catch the cuties bring alive your telly screen with their chemistry in ‘Vivah’.

ShamritaTaarey 9 years ago Missing shamrita sooo much... Sooraji please cast them again in a new movie...

14 years ago it's funny.. cuz i was thinking about the river scene too when i was reading the article.. and it's divya's fav too!!

i love this movie... soo good

14 years ago are they gonna make a sequal to vivah?

14 years ago they make such a cutee pair.. amrita looking gawwgeous in the pic <333

+ 3
14 years ago Shahid-Amrita such a cute couple.
Divya's looking pretty.

+ 4
14 years ago Im really look forward to seeing this. They all looks great. I think Divyanka is looking gorgeous though.