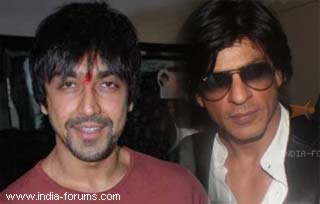 Superstar Shah Rukh Khan is known for friendliness and actor Ashish Chowdhry is the latest to praise his humility.

'Must say SRK's humility is some thing I can't get over. He doesn't need to, but does go an extra mile to give love. It was fabulous seeing u Mr. Khan,' Ashish posted on Twitter.

Actor Arshad Warsi, who is in capital to shoot for his movie 'Hai Rabba', is finding it difficult to deal with monkeys, but says that this can't be the reason to stop the filming.

'The monkeys at Sainik Farms seem to like the taste of our film crew, many have been seriously bitten by them,' the 43-year-old posted on Twitter.

'The shoot continues, monkey attack or no monkey attack...guess their just checking who is a stronger monkey... We'll win, hands down,' he further added.

Ever since 'The Dirty Picture' has hit the big screen, actress Vidya Balan has been receiving praise for her bold performance. Preity Zinta is the latest to appreciate her work and hopes she wins the top honours for her performance.

'Vidya Balan was brilliant in 'The Dirty Picture'! She blew my mind with her performance and sincerity. Full points to her and all Best Actress Awards,' the 36-year-old posted on Twitter.

Vidya, 33, sizzled on the silver screen as dancing star Silk in 'The Dirty Picture'.

Actor Arjun Rampal is upset after loosing his pooch and says that he will miss her.

'Sad day today... lost my beautiful dog Demi this morning, an emptiness in our hearts...will miss her too much. May her soul rest in peace,' Arjun tweeted.