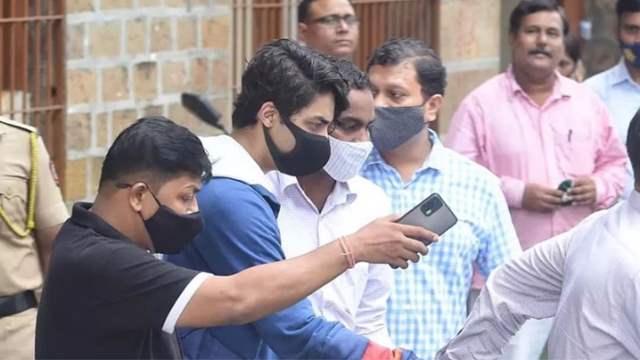 Fans of Shah Rukh Khan were spotted outside the Bombay High Court court premises today in support of Aryan Khan's bail hearing in the ongoing drugs case. These supporters carried placards with the words "Release Aryan Khan" and pictures of SRK and his son.

Meanwhile, the Narcotics Control Bureau (NCB) is reportedly planning to oppose Aryan Khan's plea again today, after he challenged the lower court's verdict and appealed to the Supreme Court.

According to NDTV, the central agency claims in a statement to the Bombay High Court that Shah Rukh Khan's manager, Pooja Dadlani, "influenced" a witness. Dadlani was previously photographed on Saturday visiting the NCB office.

speculations amidst allegations of 'extortion bid. According to reports, the agency also claimed that a "attempt to tamper with and derail the investigation" was made and that it requires "more time" to investigate Aryan Khan's alleged "international drug connection."

Aryan has been detained since October 2 in connection with the ongoing drug case. This will be the star kid's fourth bail application. Khan and seven others have had their judicial custody extended until October 30 by a special NDPS court.