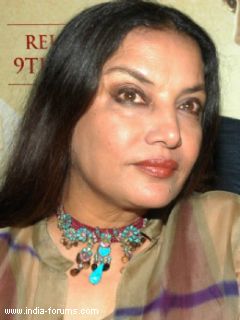 Mumbai, Sep 7 Shabana Azmi and Deepti Naval, who were shocked at the sudden demise of Jagmohan Mundhra, say the late filmmaker's 'Kamla' was turning point in their career.

Nandita Das says he will be missed sorely.

'On my last birthday he had sent me coffee cups with images of my films imprinted on it. It shows how thoughtful he was. Jagmohan's thoughtfulness and hospitality were legendary in Bollywood,' said Shabana.

'At his house in Los Angeles any and everyone from Bollywood was welcome... Anyone in Bollywood who needed any kind of Hollywood assistance - an editor, a technician or a stuntman, only had to get in touch with Jagmohan.'

Jagmohan's daughter Smriti was not aware of the tragedy.

'The girl was on a flight from Los Angeles to Mumbai which got diverted to Bangalore. So she was unaware of what had happened. Smriti was the apple of her father's eye. I had done two films with Jagmohan 'Suraag' and 'Kamla'. I've also Smriti's diploma film,' Shabana said.

Jagmohan was very proud of 'Kamla'.

'Though the film didn't do that well in India, abroad it created a huge impact...I regard 'Kamla' as a high-point in my career. He was keen to make a film called 'Bardaasht', he can't take it anymore. That film shall remain unmade,' she said.

The last time Shabana interacted with Jagmohan was when he saw 'Zindagi Na Milegi Dobara'.

Deepti Naval had no idea her friend was unwell.

'I've been shooting non-stop for 45 days in Delhi. I had left my phone behind in Mumbai. So, I had no clue he was unwell. The last I spoke to him, he was very keen to see my directorial debut 'Do Paise Ki Dhoop Chaar Aane Ki Baarish'...Now he's gone!'

'I'll never forget how much Jag encouraged me. When I did 'Kamla' with him, I was only playing sweet girls nextdoor. Initially, I was opposed to doing 'Kamla'. It looked like a bloody demeaning role of a doormat and I told him so,' Deepti recalled.

'I remember sitting with him on my sofa in my apartment facing the sea as he tried to convince me. 'I need those eyes for Kamla,' he urged me. I finally agreed. And am I glad! 'Kamla' changed the course of my career and my attitude to characters. I realized it is not important to always play the politically correct character.'

'It was because of 'Kamla' I did powerful roles like 'Main Zinda Hoon' and 'Ankahee'. I later did a small part as an activist in Jag's 'Bawandar',' Deepti said.

Though the filmmaker made softporn films in the US, Deepti says that she hasn't seen 'any of his films from that phase. I'd rather remember Jag by 'Kamla', 'Bawandar' and 'Provoked'. I'll miss him.'

'Like others, I saw his past films and my first reaction to his offer of doing 'Bawandar' was a firm 'no'. But he chased me to four different cities and it was his research, sincerity and genuine intention to tell the story, that finally convinced me,' Nandita said.

'It was one of the most difficult shoots and roles I have ever done. Most of all I was weighed down by the moral responsibility of playing some one alive and still struggling for justice...'Bawandar' will always remain a special film for me, just as I know it was for Jagmohan.'

Nandita also did a supporting part in Mundhra's 'Provoked', albeit reluctantly.

'He wanted me to play the social activist in 'Provoked'. I thought it was a bit of a stereotyped casting. But by now I had known Jagmohan, so I did it as a friend...'Provoked' was also a story that needed to be told,' she said.

'We worked together more than 10 years ago, but kept in touch off and on. I am deeply saddened and he will be missed sorely. My deepest condolences to his family and friends.'