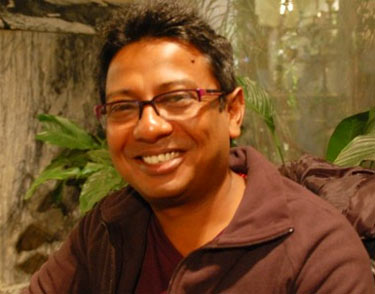 "My Brother Nikhil" and "I Am", filmmaker Onir is now working on a new project "Shab", his first romantic saga.

"I think 'Shab' will be my first true love story. A film about love and lust, want and need," tweeted the filmmaker.

The project is currently in its scripting stage.

"Read my script 'Shab' again after a gap of two months. Scripting is such an endless process. Will write the next draft from tomorrow.

"But honestly I AM already in love with the way it's shaping up, changing. I can see the images. Wonder which bodies will embody my image," he added.

Onir, who recently won a National Award for his film "I Am", said he has been working on the script for the past 10 years.

"I think 'Shab' is my most difficult script till now. An intense relationship film... A script I have been working on and off for 10 years," he wrote.

"Yes it's taken a decade and finally I hope 'Shab' will see the light of day. Each scene a pearl... But finally when beaded together correctly become a priceless piece of jewellery waiting to adorn the audiences dream.

"Right now I have unknown faces and voices... Waiting to find them. Some are known... Dunno if 'Shab' will finally find them," he further posted.

My Brother Nikhil  I Am

Sandiip Sikcand: Every platform is a medium for me to tell a story

Niti Taylor and Parikshit Bawa talk about their love story in an ...