View Profile
For ardent fans of Jay Sean, the British singing sensation and Bollywood cameo star, his mini Indian tour is no secr 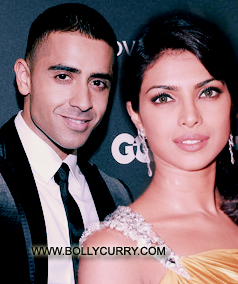 et! However, here comes the extra bit of gossip that is keeping his trip in the headlines even more than usual!

The lad is heard to have spent a Sunday night with desi girl Priyanka Chopra in Mumbai at a nightclub. While they were spotted, and adjudged as seemingly 'great' friends - the singer having kept the diva giggling like a girl with singular attention for him, as per onlookers - two and a half hour laters they were seen making an exit together.

For the uninitiated, these two are not first time acquaintances and have worked together before in 2008, when PC appeared in one of Sean's gigs.

For now, Priyanka had still more to share about the Indian version of Jay's album.

"My friend @Jaysean album drops today called "Hit the Lights India Tour Edition"..out in stores now..if you like music...this one is it!"

On his part, Jay was involved - apart from 'socializing' and his tour schedules - in performing for reality show X-Factor, about which his tweet went hence:  "Just performed on X-Factor India..was insane!" [(c)Twitter]

We sure hope the Brit boy has made his share of memories to take back home - meanwhile, we wont mind a tweet glimpse of PC and Sean on a party high, would we?!