The talks are already on as to who will be the first to get eliminated in the Agnipariksha round of the most popular reality show Saregamapa. Romance is in the air and so is the excitement as to who will that unlucky one be to get eliminated first even after traveling so far in this contest. Romance - because on Friday you can hear the contestants singing some beautiful romantic numbers in this romantic songs special episode and on Saturday Aneek proposes his love, “Dia Mirza”. 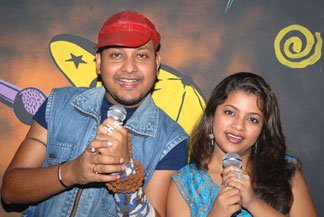 Featured Video
The Friday episode begins with the all the girls favorite star Aditya singing an apt song, “Mast baharon ka main ashique” from the movie Farz. With all focus on Aditya for the past two weeks, we will have to look for as for whom he is singing this song. Aneek Dhar once again gives a splendid performance by singing ‘Chaand mera dil’ and garbs the attention of the audiences. If you were missing Himesh’s singing for the past two weeks, then here is the treat. Himesh gets excited after his gharana contestant Aneek’s performance and the song being his favorite, he starts singing the same song. He also gives credit to the viewers on behalf of all mentors and Zee team. This episode also witnesses an emotional Joy Chakraborty who gets reminded of his dad who had passed away 20 years back and his mom whom he had to leave all alone and come for the contest.

The offers for the contestants are just pouring in this contest. For a difference, it’s not Vishal–Shekhar this time, but its Bappida who discloses the movie’s name for Mauli Dave song and its “Hojayegee Balle Balle”. Sumedha who had already got an offer for Mahesh Bhatt’s film, is given another offer by Bappida for the movie “Ranjish”. 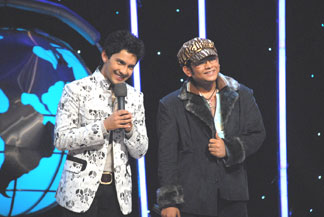 Come Saturday, Vishal–Shekhar gives a start to the show by performing their new composition, the title song of “Cash”. Aneek is already being called as another Vinit, who was the runners-up of Challenge 2005. Now adding to it is his love for Dia Mirza. Dia is the celebrity judge this week and Aneek who is known to be a shy Bengali guy, continuously flirts with Dia on the sets and after his performance on “Jaane kya chakhe man bawra from Pyaar ke side effects”, he also openly proposed to her saying – “I Love you Dia, do you love me?” There is pin drop silence on the sets for few seconds as everyone are stunned. Later she replies to him saying – “I love you too” then pauses for sometime and continues “But only for your singing, my boy”. Aneek is totally disheartened with the rejection of his proposal and to express his feeling he sings – “Tadap tadap ke is dil se aah nikalti rahee” from Hum Dil De Chuke Sanam. Don’t worry Aneek, there is always a next time and keep your spirits high – True Love always succeeds!! Aneek’s performance was such that he is compared to Sonu Nigam by Shekhar. Seems this guy is all set to go far ahead in this contest.

This time Mauli does not perform well, but is yet again supported by Himesh saying it was a wrong choice of song and because of which her performance was not effective.

Is your favorite through to the next round? Who is the contestant who had to leave this stage and which gharana will loose its first contestant? To know more about this and also about other performances,Tune into the exciting episodes of Saregamapa on Friday and Saturday at 10 PM on Zee TV.

+ 3
15 years ago Awww, bechara Aneek :P Thanks for the article Anu!

15 years ago thanx alot for sharing! can't wait 2 watch it!

but ever since aneek joined...his voice has always impressed me...

i think...he's gonna become my fav soon!! i want him to go aheadd!!

thanks for the article...cant wait!