View Profile
Sonakshi Sinha's evergrowing fan list has now reached the likes of politicians! The one-film-old actress has left everyone in awe with her amazing public 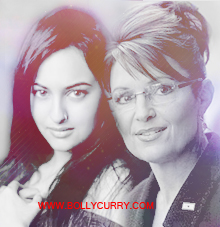 speaking skills and her views on women empowerment!
After wowing one and all with her great acting and superb dialogue delivery in her debut film, the Dabangg actress has found a big fan in US politician and commentator, Sarah Palin! Yes, you read it right! The former governor of Alaska is quite impressed with Sonakshi and can't seem to stop praising the star.
The two met at a gala dinner which was held in Delhi recently, where Sonakshi was required to give a speech.
According to sources, the duo hit it off afterwards and were seen engrossed in conversation about women empowerment and how it can change the world. Although Sarah admitted to not seeing Sonakshi's movie, she was reportedly in awe of the latter's views on women empowerment and, of course, her popularity!
Sonakshi, who was surprised to learn that Sarah admires her, talked about how she wants to do her bit in creating awareness amongst the masses, especially with regards to education and women's health-related issues. It was then that Sarah suggested the celeb use her popularity for good a cause by highlighting the issues women face on a daily basis.
Being a politician Shatrughan 'Shotgun' Sinha's daughter herself, Sonakshi won't have to look far for advice!