This week SaReGaMaPa will be getting its top 14 contestants to enter into the final Agnipariksha round. The show which has already been on news for its melodrama will see more of that sort in the coming week. Pakistan ki Beti, Sara Raza Khan who has been in controversy many a time and more recently for sharing of lyrics with Deepali in the duet, will again be seen in a controversy as according to her she is not getting the homely treatment when compare to other contestants on the show. 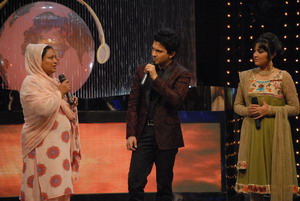 Featured Video
Although Sara smiles radiantly at you every time but there is a gloom looming large behind that radiant smile. She is the only Pakistani girl to have crossed the border to participate in the reality show and showcase her talent inspite of opposition from her community and is also facing lot of objection back at home. And this week she narrated a sordid tale of how she is being treated as an outcast here amongst her peers in Challenge 2009. She feels that she is being sidelined amidst her Indian and overseas counterparts. She and her mother openly let everyone present on the show know that since the people of her own community and own country do not approve of this, she would rather not be a part of this show, which left everyone flabbergasted on the sets.

The team of Golmaal Returns was present on the sets and this did some laughter therapy to the contestants present. The awesome foursome Ajay Devgan, Arshad Warsi, Tusshar Kapoor, Shreyas Talpade and the director Rohit Shetty not only had a blast on the sets but also released the film music. Ajay got a little nostalgic and went back to his old association with the channel when he and his family judged "Rock N Roll Family". The participants were over the moon to have such big stars with them and that brought an extra zing to their performances.

Along with laughter and sorrow also comes the tension of who will get into the show via wild card. This week’s episode will also feature the new wild card entrants but also Somen Nandi, and Vaishali who got direct entry into Agnipariksha.

To know who the wild card entrants are and which of the gharanas got the privilege of getting Somen and Vaishali, do not forget to watch SaReGaMaPa Challenge 2009 on 19th and 20th September at 10 PM only on Zee TV.

14 years ago arshad u rock!!!! what is lara datta!!!! a fake, semi anorexic walking stick!!!! she doesnt know any acting..... she should accept whatever she gets in bollywood..... arshad, try neha dhupia, she is a good but very under rated actress....

14 years ago I think the drama is being made by the media and zee tv. She is just sharing it on television, with maybe a reason of her own or becoz she is told by zee. She is not telling what the problem is and what has been written in papers. It could be somebody threatened her on the phone, and as her mom says, khaas karke larkio ke liye mushkil hai. I think there is a izzat thing, she might be scared even. So we shouldn't judge and say she is a drama queen or bitch. She must have good reasons for this. I love sara, she has a nice voice. I hope she gets very far in the show.

+ 8
14 years ago Me excited to watch Golmaal team in the show.

14 years ago If someone does not Sara so just do not watch her. Nobody is forcing to watch her. If I do not like somebody I fast forward. You guys watch and hate and broadcast your hate in the forum. Very pathetic some ppl are. They will not let Indo-Pak friendship grows. Those extremist groups are not enough for creating hatred. Now IF forum members also started since Sara came. Most of them are females. Is it a female jeoulasy? I like to know specifics of what ppl do not like. Did you hear the sher jab husn deta hai toh nazakat ahi jati hai That nazakat you are calling attitude. I like her singing and I do not see any attitude in her. I feel there are many ppl are like that.

+ 5
14 years ago shes always bringing something up. Anyways..whatever..but thanks for the article. I loved that the Golmaal cast has come on the show, and made the show soo great! WOO! thanks

xkokox 14 years ago well thats a little shocker, but thanks!

14 years ago Wish people would depend on talent instead of all these dramas for trps,popularity and selection.

14 years ago well this year i dont liek saregamapa. so i dont watch it anymore. i loved it last year with mauli, aneek, raja and everyone this year its so boring nothing exciting and yeah i have seen a couple epissodes of the show and i dont like sara one bit she has a bad attitude.