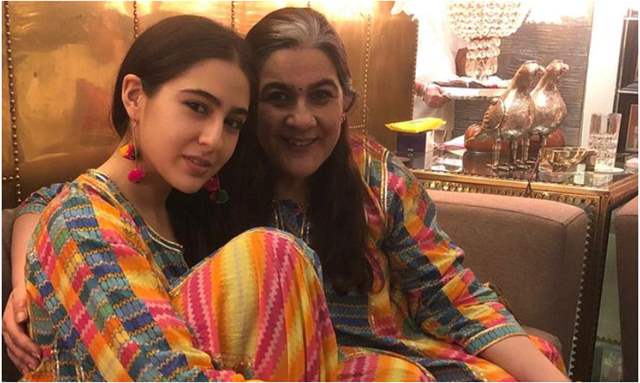 Sara Ali Khan is known to be one of the fastest-growing actresses in Bollywood with her debut film - ‘Kedarnath’ opposite Sushant Singh Rajput. So far,  the actress has just banked three films since her debut and she has her hands full with two more projects which she is currently working on.

In her previous interview, Sara revealed the identity of her biggest critic and said that while everyone’s opinion matters to her, it’s her mom Amrita Singh’s opinion that matters the most to her.

Currently, the Coolie No. 1 actress is spending time with her mom Amrita in Jaipur as they had jetted out of the city over the weekend.

Now, in an interview with IANS Sara Ali Khan spoke about not always feeling 'positive.' However, she also pointed out that her mother is a solution to all her problems. She also reflected on the same and said that if her mother can go through her life with her head high, then she can be worth the praise coming her way.

I think she has gone through so much more than I have in her life and if she can walk the way she does with her head held as high as she does as her daughter, then I would be worthy of your compliment.

Sara further added that there are days when she does not feel positive and that it is a part of her life. "There are days when I don't feel positive. It's normal. That is the part and parcel of life but I think I have a great mother and I think she is the solution to all my problems. With a mother like that, it is impossible to be any less than positive," said the Atrangi Re star.

Meanwhile, on the work front, Sara was last seen in Coolie No 1 with Varun Dhawan and now she is currently gearing up for her next film - Atrangi Re with Akshay Kumar and Dhanush. The film is helmed by Aanand L Rai and produced by Bhushan Kumar which will release on August 6, 2021. Apart from that, Sara will also star opposite Vicky Kaushal in a sci-fi superhero film, The Immortal Ashwatthama.