Telly Buzz had recently reported that the protagonist of Star One and Cinevistaas Jaane Pehchaane Se Ye Ajnabbi, Ayesha (Aditi Tailang) will either be killed or will have a face change. We had even stated that a person would hire a contract killer to kill Ayesha, after which there will be a high point with Ayesha falling off a cliff. 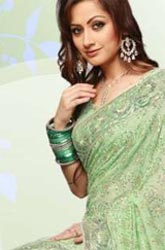 A reliable source now tells us that, "It looks as though the creative team is planning a face change for Ayesha. The decision of replacing Aditi Tailang has been taken. Aditi has in fact shot her final scenes and will be completing her dubbing sequences very soon. With that, a new actor is slated to enter the show as Ayesha".

The buzz is that popular actress Sanjeeda Sheikh has been approached to play Ayesha.

As per the buzz, Sanjeeda has been approached to play a new character, and the creative team has not taken the final decision of whether the new girl coming in will play Ayesha or a completely new character.

However, our source told us that, "Sanjeeda Sheikh has almost been finalized. But she has not started shoot yet. In all probability, she will play the new Ayesha".

We tried calling Aditi Tailang, but she remained unavailable.

But one of her co-actors on terms of anonymity told us that "Aditi is indeed very upset with the development. She has not come to terms with the creative decision taken. She has been informed that she will no more be part of the show".

Our source further explains, "Aditi Tailang always appeared very small in front of the tall and well-built Siddharth. Now that a romantic track is on the cards, the production house and channel felt that there was a need to bring in an actress who would suit the bill better".

When contacted, Sanjeeda told Telly Buzz, "Yes, I am in talks for the show. But nothing is decided as of now".

We tried calling Amita Devadiga, Creative Head, but she too remained unavailable.

Sanjeeda will also be seen in Star Plus' Zara Nachke Dikha..

The sequence of Ayesha falling off a cliff will be aired very soon..

NatalyMusketeer 5 years ago Siddharth Shukla is the one of the best loooking Indian actors.

Nandita_Siddian 5 years ago Siddharth Shukla, your Couple with Sanjeda was very nice.

ifun 10 years ago I love Sanju and am a great fan of hers. But the reason why they are replacing Aditi sounds really dumb. I don't think Sanju is any taller than Aditi. But glad to see Sanju back

kaushiki9 10 years ago we want Aditi back on show
plsssssssss Aditii plsss come back
we will not see show if won't b there.
plssssss come back. No Sanjeeda can replace you from our hearts

ishafatima 10 years ago WE WANT ADITI TAILANG BACK IN JAANE PEHCHANE SE YEH AJNABI!!!!!!!I LIKE ADITI VERY MUCH

fan2aditi 10 years ago so finally sanjeeda appears in show & aditi tailang has been replaced! its really saddening cuz show is dead to us without aditi tailang as Ayesha. It would make sense if they later reveal that sanjeeda is additional character & is working on behalf of ayesha who sits from far & hatches her revenge n all. If creators have made sanjeeda as ayesha (revealed later as ayesha) and not an additional character then this would be a great mistake altogether. I hate creators for changing Ayesha' if they have.

Prinsesse.Suvi 10 years ago I stopped watching the show when i found out that theyre gonna change ayesha