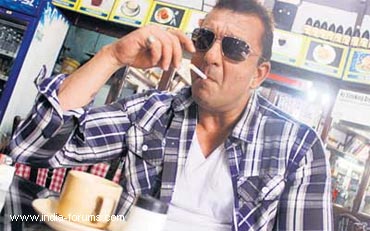 Sanjay Dutt has paid a tribute to Amitabh Bachchan with a remake of the megastar's iconic track "Thodi si jo pi li hai" as part of Ram Gopal Varma's next film "Department".

The rights of the song, which was originally part of the 1982 film "Namak Halal", were bought, and the number was given a contemporary twist by music director Bappa Lahiri for Varma's film.

"Like millions of others, I have always been a huge fan of 'Thodi si jo pi li hai' song from 'Namak Halal'. I felt that to picturise it on Sanjay Dutt will be a fitting tribute to Mr. Bachchan's classic masterpiece," Varma said in a statement.

The song is sung by Sukhwinder Singh, and has been picturised on Sanjay and ace choreographer Ganesh Acharya.

"Department", which releases May 18, features Rana Daggubati, Amitabh and Sanjay in key roles.