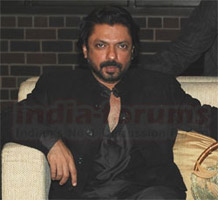 Director Sanjay Leela Bhansali is planning to cast the ‘Dhoom jodi’ Hrithik Roshan and Aishwarya Rai Bachchan to shower their ‘jashn-e-bahara’ in his next untitled venture. This venture is expected to take on the floors in July,2009.


For the first time Sanjay and Hrithik will be working together and for Ash it will be as if backing to her lucky charm for ‘Hum Dil De Chuke Sanam’ was her biggest hit ever.
His venture is suppose to be a romantic tale penned by the director himself. Earlier, Bhansali was planning a multi-starrer film ‘Heera Mandi’. However, this film required a huge star cast and hassles of coordinating dates of so many actors.

Bansali has out this project on hold for now and has decided to move forward with a mature love story starring Hrithik and Ash.
Featured Video

It is known that Hrithik has been already signed up for the movie and Ash has accepted the offer but as she is busy with Mani Ratnam’s ‘Raavan’, she has not signed it officially.However, official announcement is awaited.
This venture once again brings in zeal for all Hrithik and Ash fans who loved their chemistry in their past films .So, once again are you ready for a Dhoomaka?