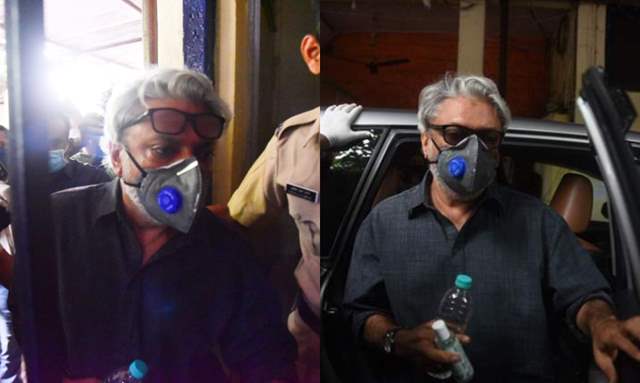 Filmmaker Sanjay Leela Bhansali was summoned by the Mumbai Police for questioning in connection to Sushant Singh Rajput on Monday. He was reportedly spotted leaving the Bandra police station after three hours.

Now, a Mumbai Mirror report has revealed that Bhansali was questioned for nearly two hours and was asked 20 questions, prepared by the investigation team. The report also stated that he has not spoken to Sushant since 2016 and as he was not close to the late actor. Sanjay also said he wasn't aware of his depression.

When the filmmaker was questioned about Sushant's involvement with two of his films - Bajirao Mastani and Ram Leela, he said that Sushant was focused on Yash Raj Films Paani, directed by Shekhar Kapoor at that point in time.

Sushant was reportedly upset as the contract stopped him from working with the ace filmmaker. An officer privy to the probe was quoted in the Mumbai Mirror report who said, "The statement of Bhansali centered around his (Bhansali's) conversation with Rajput after the film/s fell through because of the earlier contractual conditions."

So far, Mumbai Police has recorded statements of 29 people who were associated with the late actor including his close friends Rhea Chakraborty, Mahesh Shetty, and producer Sandip Ssingh. His family members, domestic help, director Mukesh Chhabra, his co-actor Sanjana Sanghi from his last film Dil Bechara, and his manager were all also questioned.

For the uninitiated, Sushant was reportedly suffering from clinical depression and was taking medicines for the last six months before he took the tragic step. His untimely death has taken the entire film industry by a storm and celebrities are mourning the loss of a talented actor.