The casting problem for Sanjay Gupta's 'Alibaug' might have been sorted following Sanjay Dutt's exit, but the producer-director regrets his good friend's departure from the cast.

Irrfan Khan has now been roped in to play the crucial role and shooting will resume soon.

'I won't call Irrfan a replacement. Professionally and personally, Sanjay is irreplaceable in my life,' Gupta told IANS.

Irrfan has also just finished shooting 'Acid Factory' for Gupta, who regrets that he is moving on with one of his most ambitious project without Sanjay. 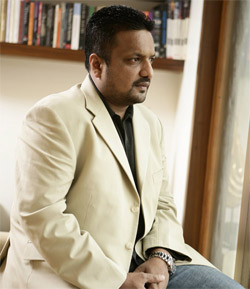 'I've to regretfully move on with the casting. I wrote the film with Sanjay Dutt in mind and even shot with him. But then destiny, if we can call it that, intervened. And he made his inability to do the film expressly clear.

'He didn't tell me why. I didn't ask. All I can say is Sanjay and I never shared only a professional rapport. When a year ago he made his exit from 'Alibaug', I was not willing to accept it,' added Gupta.

'Alibaug' is Gupta's most personal film because it deals with the time when he almost lost his life in a car accident four years ago. Sanjay was slated to play a character based on Gupta.

'The film goes way beyond just another project for me. The entire cost of the film is what I charge as a director today. I could easily be making something else. 'Alibaug' is being made for strictly personal reasons. Ironically, I suffered a huge personal loss (Sanjay's friendship) during this film.

'But this film is vital to my actors and me. This film means a lot to them. I can't afford to let them down. We waited two years. Now I've no choice but to move on.'

'I wasn't looking for a star as big as Sanjay. It's my good fortune that today as a star, Irrfan has arrived. I was looking for a good performer... that Irrfan is. We spoke about the film five-six months ago.'

Gupta will have to re-shoot about 10-12 days of Sanjay's portion.

'It's a pity he's not there. It was a departure for Sanjay from everything he has done. But he sent me categorical messages saying he won't do it.

Said Irrfan: 'One day Gupta narrated the script to me in the car. I immediately fell for it. The problem was I had to replace a star of Sanjay Dutt's stature. Fortunately, I've a very clear sense of his personality. I can occupy his space in 'Alibaug' without having to worry about how he'd have played the role.

'I've tremendous admiration for Sanjay Dutt. He always plays his roles so straight and transparent. I'd like to achieve the same level of transparency in my performance. Actually, I've never replaced any actor before. I'd like to see my role in 'Alibaug' as a new challenge rather than a replacement.'