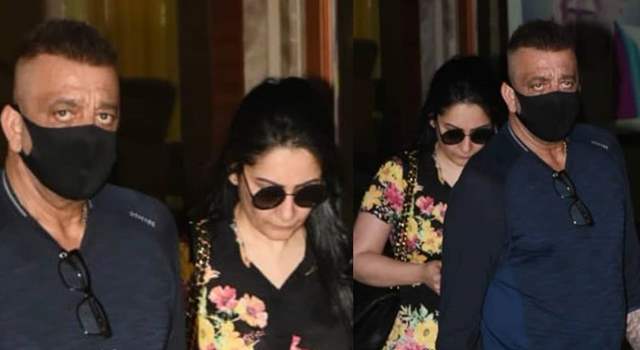 Sanjay Dutt is currently undergoing treatment for Lung Cancer that was recently detected. Amid his on-going treatment, the actor flew down to Dubai along with his wife Maanyata Dutt from their private jet.

However, it was not disclosed where the actor was heading to but most of the people speculated if he is going for his medical treatment in the US as it was earlier reported that the actor may have gotten a 5-year visa for the US on medical grounds. Nevertheless, it is now revealed where the actor and his wife have headed to.

According to a report in TOI, Sanjay Dutt who has been diagnosed with lung cancer took a chartered flight last evening to Dubai to meet his children, Shahraan and Iqra.

An Industry source who claimed to be close to the Dutt family revealed that Mr and Mrs Dutt have headed to meet their children and are expected back in the city in a week's time. "Sanjay is doing well, and is expected back home in just a week or 10 days. He wanted to see his twins, who are still in Dubai. They're attending their classes from there," says the source.

After reportedly being diagnosed with an advanced stage lung cancer, Sanjay Dutt announced a break from work for his medical treatment. Reportedly, he has been making multiple visits to Kokilaben Hospital for his preliminary tests. In fact, TOI also reported that Sanju Baba has completed his first round of chemotherapy sessions at a private hospital in Mumbai.

As Sanjay Dutt is battling with his lung cancer, his wife Maanyata Dutt who is standing beside him like a rock keeps spreading positivity and motivation on her Instagram account that are all related to him and his battle. Just recently, she shared a post about fear, telling us that it has two meanings and one of them says to face it and rise.

Meanwhile, Sanjay Dutt will be next seen in Torbaaz, Bhuj: The Pride India, Shamshera and KGF 2.

AshVal6 11 days ago when sanjay was in prison his wife said she got cancer and he got permission to come home but heard nothing from her of cancer , now bollywood on fire he has lung cancer and on chemo .. god forgive me if im wrong but he does not have any signs ie weight loss hair loss