View Profile
An underwater action thriller, 'BLUE' captures the fast paced action, above and below the ocean as never seen before in Indian Cinema! 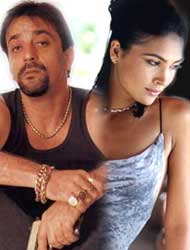 Featured Video
And when you talk of a film based on underwater sequences, how can you miss out on the most adorable sea animals – the dolphins?


The audiences will get to see Sanjay & Lara cavorting delightfully with the sea creatures in a romantic song 'Aaj Dil Gustak Hai' in the film.


Says director Anthony - "It was very difficult to shoot with the wild spotted dolphins and we had to travel overnight to Bimini to shoot with them. It was well worth all the efforts as the outcome was spectacular! We were extremely lucky to find a cluster of them and the delighful tricks which the dolphins learnt especially for the song make for a visual treat."


The song has been picturised on the actors playing with wild dolphins in all their majestic glory in Bimini Islands. There were also scenes which required them to shoot at close range for which they had specially trained dolphins at the dolphin encounters! These mammals were specially taught tricks which are shown in the film.. Not just the actors even the dolphins were trained for their roles!!!


Even after the required shots, Sanjay and Lara would stay back in the dolphin encounters and play with the dolphins!!! And being very intelligent creatures, the mammals picked up the tricks very fast and were loved and petted by the entire team!


Dr. A R Rahman has composed the tracks for the film with the winning combination of Resul Pookuty engineering the sound.