View Profile
The very unusual combination of Konkona Sen Sharma and Paresh Rawal is certainly inviting especially when they are romantically paired. This pair will see the light in the movie 'Fantastic' to be directed by a well known 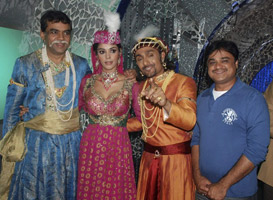 Featured Video
director Sanjay Chhel. He confirmed the news and said, "Yes, Konkona will be playing a role of a typical woman from today's society. She also gets to play opposite Rahul Khanna, a millionaire in the movie along with Javed Jaffrey. A prominent role is captured by Neha Dhupia too. The movie is a romantic comedy". The film is scheduled to go on the floors by August-end. Sanjay can play magic with Konkona, an outstanding and talented actress along with the most versatile character actor Paresh.

"Maan Gaye Mugllale-Azam" scheduled to be released by August end is from Sanjay's basket. It is directed by him and is a theatrical comedy with a socially relevant feel. He is quite confident of his work and awaiting its release.

The multi talented Sanjay Chhel, has been a successful writer, director and lyricist for over a decade and has already left an indelible mark in the Hindi Film industry by writing for movies like Partner and Maine Pyar Kyun Kiya. Sanjay wrote and directed his first commercial success "Khoobsurat (2000)" starring Sanjay Dutt and Urmila Matondkar.

Sanjay, a multi-talented person, choosing to direct an unconventional pair- surely is a fantastic idea- for the film 'Fantastic'.