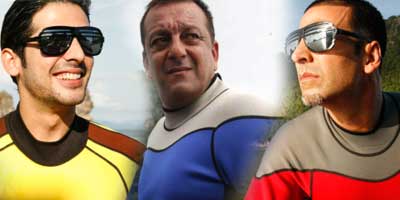 Shree Ashtavinayak Cine Vision Ltds's under-water action adventure BLUE directed by Anthony D'Souza definitely spells danger, excitement, thrills and dare-devil risks! It's not just the audiences who will get to see these stunts but the actors themselves who went through the perils in order to get the best shots for such a never-seen-before adventure!


In one such incident, Akshay Kumar was injured, while filming the under-water fight sequence, where he is seen without an oxygen mask. Akshay banged his head against an iron shaft and began bleeding profusely.


This is one of the most frightening moments of the film, because there were 40-50 sharks in the nearby vicinity. And as soon as the crew realized what had happened, the safety divers who had a chain shield covering them immediately rushed to form a protective circle around him forming a pack and bring him to the surface. Simultaneously the shark baiters deliberating swam away from Akshay and dispersed the bait in order to mislead / distract the sharks.


And even though an alert crew member pressed a hand over the wound to stem the flow of blood, it was a very scary sight to see 3 sharks who had sensed the blood, still following them up all the way upto the surface.


Nobody especially Tony could breathe easy until Akshay was escorted safely aboard the yatch.


Akshay's fortitude, at such a crucial juncture, ensured that in spite of the injury, he did not panic till help arrived. Even after he was safely back on the boat, his first enquiry was, "Was the take OK, or do you want me to do one more?"!!!


While Akshay had to overcome the threat of the sharks, Sanjay Dutt was also in dangerous waters from the start.


Apparently Sanjay Dutt had a medical condition which got aggravated every time he went deep inside the ocean with his oxygen tank. The tanks which everyone used contained a mix of Nitrogen and oxygen which made his lung condition worse. Despite that the actor refused a dupe and insisted on doing all the stunts himself.


Well, when you make a film which has never been attempted before, the risks & perils are also a part of the game! And the debutant director Anthony D'Souza seems to be confidently cruising through choppy waters, quite literally!!!