View Profile
In the coming episode of 10 Ka Dum on Sony Entertainment Television, Farah Khan one of Salman's oldest and closest buddies, exposes the fact that Salman was very much untrained in the field of dancing during his initial struggler days. 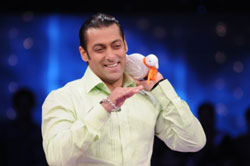 Featured Video
Says our source, "Farah reminisced about the time when Salman was terribly nervous about his audition for Sooraj Barjatya's Maine Pyar Kiya, which we all now know as his first big hit film. Salman apparently took Farah along so she could show him a few steps to impress Sooraj. But what Salman did was so appalling that she simply picked up her footwear, hailed a cab and took off home!"

Guess what Salman's reaction to this revelation was? Our source tells us, "Salman was visibly embarrassed but the sport that he is, he demonstrated the horrible step to everyone!" The source further adds, "The step was definitely not worth impressing anyone, leave alone a director. However, Sooraj must have looked at Salman's innocence and vulnerability to cast him as Prem."

And thanks for that or else our country would have missed out on this sensational actor!

Catch this episode of 10 Ka Dum at 9 pm on Saturday, August 1, on Sony Entertainment Television.

+ 2
13 years ago Can't wait to see those horrible steps- farah khan and SALMAN khan were best buddies back then? :O = I didnt know that!

+ 3
13 years ago Salman can't Dance to save his Life Lmao .. But somehow he makes up for it, I mean he's just Perfect at Everything else that the fact that he can't dance doesn't really Matter ..

and You Know what, I'm Glad that the Director of MPK Made a Wise Decision, I can't Imagine anyone else playing the Characterof Prem with such Perfection .. and God how Cute was he Then !!!! *Blushing* .. Not that he's not a Hunk Right Now *Grinning*

aneesan 13 years ago Inspite of all the controversies, this guy has perfomed extremely well in quite a few movies. We have had bad dancers but good actors anyways..

13 years ago def Salman Khan is very sweet and he ven make fun of himself ... such a darling..

13 years ago well salman is really a charmer......so sweet yar. after farah's revelation also he was so sportin to face dat in front of d whole lot of audiance n even did dat step......hats off to him........

+ 3
13 years ago "And thanks for that or else our country would have missed out on this sensational actor!"
lol sooo truee...luv salman!

14 years ago Wish u all the luck. manjari is sooo beautiful