View Profile
After successful cameos in the Ranbir starrers Saawariya and Ajab Prem Ki Ghazab Kahaani and Ranbir doing a special performance in his home-production, Chillar Party, this wasn't expected of Salman Khan. Was it?
What, you may ask?

Well, it  seems like Ranbir's romantic associations are costing him a tad too much!
Still confused, read on!

Bollywood's one and only, Salman Khan, who has always 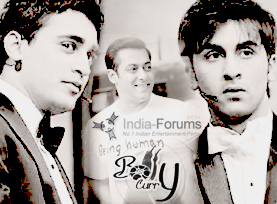 maintained a good, rather great, rapport with the Kapoors in the times gone by, seems to have changed parties after Ranbir Kapoor's continuous links with Salman's ex-beau, Katrina Kaif.

Rumors have it that Salman has slowly started to stray aloof from the Kapoor family in the recent days. In fact, he is now outrageously lobbying for Ranbir's latest rival at the Box Office - Imran Khan, and is asking (somewhat persuading) his dear ones and followers to watch the Imran starrer Delhi Belly, which is being produced by Salman's good friend, Aamir Khan.
Over recent interview, Salman deliberately makes a point to mention Delhi Belly and appeals viewers to watch the movie. However, when asked about Ranbir Kapoor who has performed an item number in his first home production, Chillar Party, all Salman has to say is wishing a good future for him and hoping that the song "Tai Tai Phiss" works well for both the film and Ranbir.
Needless to say, the competition and comparison between the good buddies, Ranbir and Imran, is very obvious. And going by the data, their respective favorite hero from the industry is none and other than Salman himself!

Nonetheless, whatever the rumors might be, Bollycurry does hope that all stays well between the three hotties of B-town.