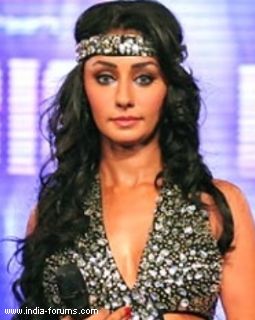 Mahek Chahal had ugly fights with her 'Bigg Boss' inmate Akashdeep Saigal and things became so unpleasant between them that a patch up had to be effected. Many felt that she got the special treatment because of the game show's co-host Salman Khan, but the model-actress denies this.

'It is not right to say that Salman has been favouring me. I share a very nice relationship with him but that doesnt mean he is biased towards me,' Mahek told IANS on phone from Mumbai after being voted out of the show.

After being evicted, the model-actress blames Akashdeep's ego for their acrimonious fights and hopes Siddharth Bharadwaj wins the game show.

'I was waiting for him to come and say sorry, but not even once did he try to come forward and say, 'What I did was wrong and I am sorry'.

'There has to be some respect for each other and he never once realised that he is talking to a woman. I was appalled, doesn't he have any self respect? He needs to learn to be affectionate towards people,' she said.

Talking about Siddharth, she said: 'I want people to open their eyes and see the potential that Siddharth Bharadwaj has. He is a young blood and may not have the experience like the other inmates. But he has all the qualities of a winner. I wish Siddharth wins.'

In the show, the contestants have to stay inside the 'Bigg Boss' house without any connection with the outside world with 24X7 camera surveillance.

The fifth season started with 14 contestants and right other than Siddharth, Sunny Leone, Juhi Parmar, Akashdeep Saigal, Shonali Nagrani, Amar Upadhyay and Andrew Symonds are vying for the big prize.

Mahek calls her stint on the reality show as an experience of lifetime.

'The two months that I have spent in the house have been the most important months of my life. It has been an experience of a lifetime. I have realised the importance of things that we usually take for granted,' she said.

'I have realised the importance of relationships. Fights and arguments are an inevitable part of life, but one should not stretch it and forgive each other as soon as possible. Be happy and move on,' she added.

Mahek, who made her Bollywood debut with 2003 film 'Nayee Padosan', says she has emerged as a stronger person.

'I am not scared of anything now. I have learned to stand up for what is right and speak the truth,' she said.

The actress has also made some 'good friends in the house like Siddharth, Rageshwari, Shraddha Sharma and Vida Samadzai.'

gwynn24 8 years ago sid should win...but sky desperately wants him out...if not tru nominations den by getting him kicked out for violence..he is openly provoking him to hit him...wot a dirty game akashdeep is playing...

anjup83 8 years ago You are the winner for me Mahek..BB is fake for having evicting deserving candidates like u.. All the best for all your future endeavors..

larki_punjaban 8 years ago its a big tamacha too all sallu-mc haters, know look salman was not supporting mc at all! ppl who say this r themself dosti k naam pe ek bhara dabbha who doest know the mein humanity!

Nabeelah 8 years ago Mehek is the winner! love u! hope u go back as a wild card and win

sitakshii 8 years ago Mahek you were the best in BIG BOSS HOUSE ...CANT believe that ppl like shonali,juhi and sky are in the finalist race ...

Billu-Maamma 8 years ago you are the winner for me.love you mehak.all the best for future.@yipee andrew is not a contestant he is a guest.

Ashalata Wabgaokar passes away due to COVID-19
32 minutes ago

Zarina Wahab was Tested Positive for COVID-19; Actress ...
42 minutes ago