Mumbai, Dec 20 (IANS) Actor Aseem Merchant, who's shooting in Hyderabad for producer Boney Kapoor's yet untitled action film, got the surprise of his life from his co-star Salman Khan.

'He made a sketch of me. It's so beautiful, so life-like and professional, I feel Salman can shape into one of our best artists,' Aseem told IANS. 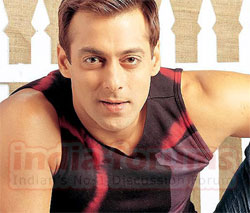 The shooting of the Prabhu Deva-directed film is nearly over. 'In the night we would get together for drinking sessions. So it was on Monday night. We sat together at 9 p.m. and went on till 2 a.m. It took Salman a good two hours to make my sketch. At the end of it I feel I'm the richest man in the world.'

Aseem intends to frame the sketch in his room. 'I don't know how many others have this gift from Salman. But I certainly feel privileged.'

Salman and Aseem play the main antagonists in the film.

'The film is about modern gangs. Salman plays an undercover cop while I play a gangster. So during most of the day we're fighting each other on camera.

Aseem whose career has been in a limbo for many years is suddenly doing quality work.

'Besides this film where I'm the main villain I play the lead in Sisir Mishra's Bengali film 'Aseema'.'

'These demarcations exist only in our minds. The audience readily accepts an actor in negative and positive roles.'