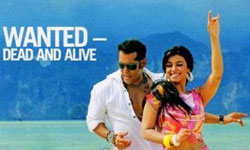 Featured Video
turn to come. Earlier it was his film 'Milenge Milenge' that got stucked as Shahid and Kareena were not on terms to work with each other. Now that this problem is sorted out there is another to come in.


Boney Kapoor's one of the expensive projects 'Wanted Dead or Alive' starring Salman Khan and Ayesha Takia seems to be stucked for the lead actor Salman Khan is not keen to give the dates to dub for the film.


Currently Salman is busy shooting for Anil Sharma's periodic film 'Veer'. As known the actor is more excited about this project for he thinks this might break his strings of flop. But 'Veer' is at long distance from the way of completion and for that obstructing a completed project doesn't make sense.


So fans what you think about Salman's this decision a wise one or folly?