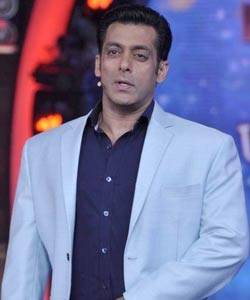 Last Sunday during the Weekend ka Wow with Salman Khan, the popular host who is getting a lot of flak for his talks with the contestants of the show again reiterated that he may not be there for the next season of Bigg Boss.

The show saw the actor duo Imran Khan and Kareena Kapoor come in on the show to promote their upcoming film Gori Tere Gaon Mein. Everyone knows that Salman and Kareena are good friends so Salman was seen pulling her leg and Kareena warning him not to. Finally, she announced playfully that she will not appear on the show next year to which Salman too replied that he too may not be seen on the show next year. Even though he said so laughingly, Salman has said this earlier too when he had an altercation with the contestants when Kushal Tandon had a fight with Tanisha Mukherjee and Gauhar Khan had supported him but Salman had taken Tanisha's side.

After this Salman was accused of being partial to Tanisha & Armaan Kohli to which Salman reacted more than once over social networking sites. Even last week Salman tried to clear his side by saying that he does tell the contestants how to behave but ultimately they listen only what they want to.

Says a reliable source from the sets, "Salman is a genuine person and he says what he has in mind. What you see is what he is while shooting. Nothing is scripted and no one can stop him either. He is chilled out but speaks his mind and later a little bit is edited too but he is totally entertaining."

When asked whether Salman is serious about quitting the show, our source said, "Salman has been the host for the past four seasons and enjoys his role as a host. He has been his real self all the time and only this year due to certain misunderstandings he is troubled. Ultimately, it is his decision entirely as to what he will do next but due to his sense of humor and star presence we all hope that he stays."

Now if Salman quits it needs to be seen as to which star will come in as a host who will match the capabilities and star quality of the earlier hosts. What is your guess?

Budtameez 6 years ago Why would Salman quit a show that pays him more per episode[5 crore] then what aTop Bollywood Actress can earn for doing a WHOLE movie!

sxy_angel1 6 years ago i luv salman khan but i watch big boss for contestents not host and weekend ka wao hosted by salman has less trp as compared to weekdays...host can be changed n m watching bb from season 1 but i haved luved all seasons...salman sir was best till last season but now he is being biased...luv to see u sallu in movies or show lyk dus ka dum not bb coz ur decisios are biased and m ur fan but not blind fan :/

YOU HAVE BEEN HOSTING BIGG BOSS FOR FOUR SEASONS, THERE HAS BEEN LOADS OF UPS AND DOWNS.

YOU AND ALL THE OTHERS HAVE TRIED AT THEIR LEVEL BEST TRY TO CLEAR MISUNDERSTANDINGS, BUT NOT ALL WERE RESOLVED.

IF YOU ARE DOING THE NEXT SEASON, IT WILL BE GOOD, BUT IF EVER YOU ARE NOT, NO PROBLEM, YOUR MOVIES ARE ENOUGH FOR YOUR FANS :)

IF A SHOW IS GOOD, PEOPLE WILL WATCH AND SUPPORT THEIR FAVORITES FOR SURE :)

LIFE KEEPS GOING ON AND AT THE END ALL IS WELL :)

purvi_tvstarlet 6 years ago SRK , HRITHIK or even SHAHID KAPOOR willl be A GREAT HOST for BIGG BOSS SEASON 8 ONWARDS

poojacoolncute 6 years ago LOVE to see salman as a host ... he should not quit he is the life of bigg boss i started watching bigg boss when he started hosting ...

NIDHIRAJSHARMA 6 years ago he should not quit the show. he is the best host of big boss.
love salman

patie 6 years ago Good for u

I hope he quits BB

pop77 6 years ago I hope he don't quit show..Only watch for him on weekend..

sehaforever 6 years ago Whatever salman was said is just for fun ... I really liked his hosting but i am not watch big boss for him ... & it is also true that he is biased & its unfair ... So if he left bb then its an oppurtunity for all of us to watch a new host & if he is not leaving then i am eager to watch that he will biased next season or not ...

_mahi_ 6 years ago Sallu.. I adore you to the bits hawtiee.. and I love watching you on the weekends..

you are one my all time favorites

But you were biased for TanMan dear.. and if you weren't biased at least you were picking on Gauhar and Kushal too much.. thats what I believe was happening..
You are there to host the show, not to judge what people are doing.. Let them be whoever they are.. don't pick on them and humiliate them.. if you happen to do that, then play it fairly darlin..

But I still love you Sallu and will always do, no matter what

Payal Ghosh's Lawyer: Misdeed Against Her is an Offence; ...
an hour ago

Kangana Takes Jabs at Deepika Padukone After Her Name Leaks ...
6 hours ago