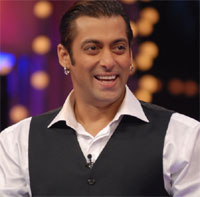 Salman Khan is the ‘perfect’ friend to his buddies and his best pal Govinda can vouch for it!!

But not many know that Sallu mia is very much devoted to his pets too… He may be a bachelor, but takes care of his nephews as his own kids, whether it be Arbaaz’s son Arhaan or Sohail’s son Nirvaan. Well, Salman has two more kids Myson and Myjaan, the last two being his pet doggies!!

Few know that when Salman is away from home on long outdoors, he never fails to call home and speak to his two sons on the phone with the speakers on to hear them bark away furiously in response to his queries. The dogs, it is said, look forward eagerly to these phone calls from their master!

Three cheers to the master!!

+ 6
14 years ago so cuteeeeeeee..........
now i like sallu bhaiyya... he's really a nice person....
u know, for that year when the khabar of his killing a poor person who lived on the raodside surfaced, i started to dislike him... but whatever he has done in the past few years had made it up... i remember when he came on SVOI, and then he hugged tt cute girl Sahara... he was very good wiuth her, and then i realised tt he didnt wanna hurt anyone, esp tt nite... it was all just an accident...

anyways... back to my original point...
sallu bhaiyya is so cute... esp with kids... he even named his sons my-son (mera beta) and my-jaan (meri jaan) if u like translate it... i must say, kat is very lucky to have him as a bf... he even likes her so much too...

14 years ago awwwwwwww, salman is so sweet
ppl alwayz misunderstand him cause he doen't feel the need to defend himself
Love salman

zabin_04 14 years ago yes I'm agree with this
he is really nice person but people dont understand him if u try to kne him.
I'm sure u will like him

he is the best