Salman Khan is in no mood to slow down as he continues to juggle his Bollywood career and his reality television show 10 Ka Dum on Sony Entertainment Television. However, mother nature seems quite stern to make him understand that he should take it easy on his body. 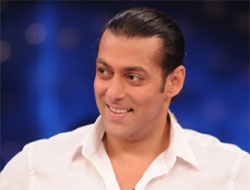 Featured Video
According to our source, "Salman Khan turned up on the sets of 10 Ka Dum with stubble of many days. Many thought that he was growing a beard for a particular role. But it turned out that the reason was more personal than professional. Salman had actually torn a tissue in his back during a training session at the gym."

This minor injury gives the actor bouts of splitting pain. Says our source, "This torn tissue has put Salman in a very uncomfortable state. He is not even able to do his day to day activities regularly. Hence he turned up with the stubble on sets."

However, Salman saw to it that he did not make the people who are depending on him bear the brunt of what he is going through. Our source further explains, "The professional that he is, he was back on the sets in no time all spruced up, clean shaven and raring to go. The only giveaway was the short breaks he took when his back hurt too much."

Catch Salman Khan in action on 10 Ka Dum on Saturday July 11, at 9.00 pm only on Sony Entertainment Television.

lleyton_crazy 13 years ago he is the best....hope he gets well soon
u rock salman

gokulraj 13 years ago Hi Salman, Hope he will gets all fine soon. Allah saves You. Take rest & take care.

13 years ago Salman Bhai get well soon and recover fast, u r our Rockstar the real King Khan, no matter what others say about you

May Allah give the the strength and power to recover soon and bounce back with grace, Inshallah you will be alright King Khan