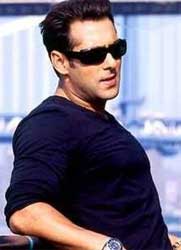 Known for his big heart but even more for his tempers, Salman Khan surprised guests when he reacted calmly to a tight slap at the success party of Sanjana Jon's fashion show.


Other actors present included brother Sohail, colleagues Sushmita Sen and Riya Sen. Hosted in the capital, the party was underway until the wee hours of the morning when a commotion started as a drunk girl named Monika tried to force her way in to the party venue. Loud and brash, the inebriated girl caught Sohail's attention who asked the security guards to keep her, and the chaos she threatened to be, at bay.
Monika reacted by abusing Sushmita Sen and bragging about her connections. Reacting to the unnecessary hungama, Salman approached and politely asked the girl to leave; only to recieve a tight slap in return!
Surprising, perhaps even astounding, those accustomed to witnessing Salu's lose impulses, he refused to retaliate. Calmly, instead, he  went back inside with Sohail after the girl was escorted away from the party.
Featured Video