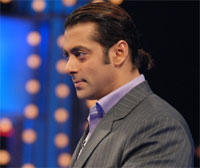 Ever since Salman Khan sported the little pigtail at the launch party of 10 Ka Dum, this news has been the talk of the town!! The cute little pigtail makes Salman look really suave. But it has also set tails, sorry, tongues wagging that he is aping SRK all the way—from hosting a game show to the hairstyle that SRK was seen sporting.

If SRK was sporting one while his hairdresser was on maternity leave, then Salman, unlike SRK, is simply growing his hair for a change. Ask him about this new hairstyle and the macho man will be seen saying, "I like long hair and I have had it, for a long time, remember? Now it has grown long and unruly so I am just keeping it tied…"

Well, now that Sallu mia has cleared the air, no comparisons to SRK please!
Featured Video

sanjimi 14 years ago I like both these actors, So I don't think my answer is biased. In my opinion Salamn Khan looks better with the tail than SRK did. I really wasn't feeling the look on SRK to tell you the truth.

14 years ago Salman is a great guy he is hilarious on Dus Ka Dum.

14 years ago Pigtail or pigtail...the man is just hot regardless!!!!

14 years ago y does the media feel that everyone copies SRK??????????..Salman is lookin wayyyyyyyyyyy better than SRK in dat pigtail..i like SRK in look hes sportin rite now

14 years ago he looks cute in every way....and with the ponytail i prefer salman bcz he looks much more cuter that SRK

14 years ago I wouldn't care even if he went Bald. Sallu is always hot!

14 years ago oh thnx for sharing!
salman does luk better in this style.