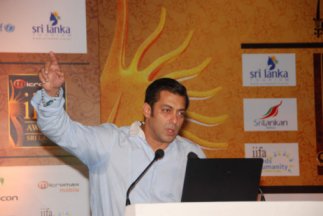 The Indian International Film Academy Awards Ceremony is among Bollywood's most prestigious award shows, and serve as a platform to parade Bollywood to the world. Now, IIFA is giving back to the community with its Charity Initiative, which will strive to help bring housing, literacy and rehabilitation to the people of the previously war-torn regions of Northern and Eastern Sri Lanka, as well as forge closer links between democratic republics of Indian subcontinent - Sri Lanka and ourselves.

Actor Salman Khan has agreed to be the brand ambassador representing this charitable initiative from IIFA. The actor, who heads the Being Human charity foundation, is fully supportive of what the IIFA hopes to achieve, and is glad to help bring positive change to the citizens of Sri Lanka.

One of the first things that IIFA will be doing is organizing a cricket match for charity between Bollywood celebrities and Sri Lankan cricketers on June 4th, one day before the main award ceremony. This will be part of the 'cricket for change' project, which aims to help rehabilitate child soldiers of the LTTE. Plans are under construction to provide for the formal training of these children in the sport that becomes ground for common good intention and growth with this initiative. The proceeds of the cricket match will  go towards a village that IIFA, in partnership with Habitat for Humanity, is adopting and rebuilding, to house refugees. This will involve building around 100 houses in the Jaffna region.

The IIFA Awards Function, held in Colombo on June 5th, will be hosted once again by Ritesh Deshmukh, Lara Dutta and Boman Irani.

We here at Bollycurry applaud and support IIFA's efforts to revive the neighbour's community. Kudos to the Bollywood community for caring and sharing! And bravo Salman, the macho man with a heart of gold!
7 Likes

Mandana Karimi and Radhika Apte come out in support of ...
2 hours ago

Akshay Kumar Breaks his 18 Year's Rule; Shocks Everyone
3 hours ago