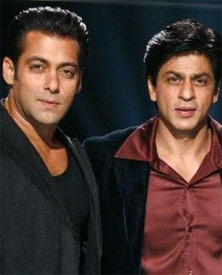 Featured Video
Ka Dum. Salman is reportedly ready to forget the spat he had with Shah Rukh Khan and forge a new friendship with King Khan. Furthermore, Salman Khan is more than willing to have Shah Rukh Khan as a guest on his TV reality show Dus Ka Dum.
"If Sony wants to bring him (Shah Rukh) then he is more than welcome. It'll be his good fortune if he comes. I don't have a problem with it. It's not a big deal. After all, I'm not getting married to him!!" Sallu said.
"Definitely, if the show producers want and if Shah Rukh too is interested in coming. What's the big deal?" asks Salman. "I have no problems." While Salman admits that stars often take competitiveness too seriously, he wishes Shah Rukh well.
Asked what he felt about Shah Rukh's last TV show Kya Aap Panchvi Pass Se Tez Hain? which didn't do too well, Salman says: "It feels sad. Everybody's shows should do well."

Sallu also lashed out at the media for portraying him as the bad boy of Bollywood. "Celebrities are always in a catch-22 situation. You keep writing false stories and when there is no reaction, the falsehood continues. If you react, more will be written," he said.
Its reported that Salman has even sent feelers to King Khan and wants to build a professional relationship. His brothers are on good terms with SRK and perhaps the temperamental Salman realised that in the ever competitive and professional world its smarter to be on good terms with a powerful star. Well it was assumed that the more mature SRK would extend the hand of peace but looks like Salman is in a building friendship mode.  Now its over to SRK how he reacts till then Best of luck to Salman.