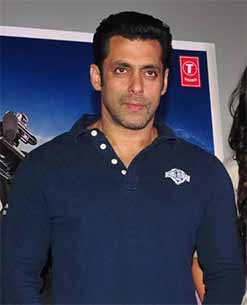 "O Teri" is made by Salman's brother-in-law Atul Agnihotri and in this endeavour to support the newcomers, Salman would be shuffling around with his shooting schedules for Sajid Nadiadwala's "Kick" and various other commitments.

Salman is currently shooting for "Kick" in Delhi and Bilal said: "Salman bhai is in Delhi right now. He has asked Pulkit and I to join him there, so he can promote the film with us. Bhai would be accompanying us on various city tours."

Bilal admits Salman has never gone so out of his way for any film before. "But then he is more than family to us. The Amrohis are very close to Salman bhai and his family."

Bilal confesses he is closer to Salman's brother-in-law than to Salman.

"I call Alvira Khan (Salman's sister and Atul Agnihotri's wife) 'Baby Maa'. I feel I have three mothers. My biological mother, then my uncle Shaandar's wife who has brought me up likes her own child and Baby Maa. I am blessed, I guess," he said.

It was to get away from all this triple-layered mothering that Bilal took a six-month acting course in Los Angeles.

"I deliberately chose a city where I had no family and friends, to learn acting. I was on my own in LA for six months. That helped me to grow up," said Bilal who admits "O Teri" first went to his co-star Pulkit, who is Salman's raakhi-sister's fianc.

Bilal can't wait to see how audiences react to the film.

"Pulkit and I play two squabbling Tom ande Jerry type YV journalists. We start off as bumbling fools and end up as reluctant heroes. I couldn't have asked for a better launch and I couldn't have hoped for better producers to launch me. Salman and his family are like a second family to me," he said.