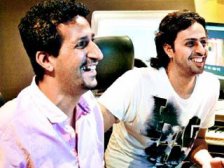 
After a mutual African friend of the two suggested that they compose a song for Republic of South Africa, the hosting nation of FIFA this year, the duo began to work on it, and came up with 'African Promise', written by Salim's wife Jeanne. Their song has gone on to be handpicked by the FIFA committee.

Salim and Sulaiman will be performing alongside African RnB singers Loyiso Bala and Eric Wainaina. But are they jittery about performing on such an international level? Sulaiman brushed off any such notions, insisting that they are more concerned about the quality of their performance than losing nerves over who they shall be performing with, and at what pedestals.

We wish the duo all the best for their performance, and congratulate them on bagging such an honour!