View Profile
Is Saif playing safe? Not exactly in his nature to do so, but this time he sure is.
Saif Ali Khan made sure he missed yet another public meeting with ex-girlfriend Rozza Catalano, from he broke off not too cordially it seems. At least not as cordially as Kareena Kapoor dumped long-standing beau Shahid Kapur for Saif! 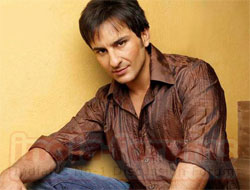 Featured Video
The actor who is on a new high at present made a special appearance on 9X's television show, Yeh Hai Jalwa, making sure that he made his appearance only after Rozza, one of the contestants, was eliminated from the show.
About a month ago, too, Saif had turned up for a press event at the same venue as Rozza, who was simply in the next room. Was there something more to it than meets the eye? When the media quizzes Saif on 'the coincidence' or asks him about Rozza, the actor-stud plays dumb if not deaf.
But the question is why does he have to plan his moves at the same venue anyway? And then start ducking? This seek-and-hide game might be grist to the mill, but is he trying to smoke the peace pipe with Rozza again notwithstanding the 'Kareena' tatoo on his forearm? Or does he chicken out at the last minute, knowing he has a spitfire of a beloved back there who would chew him and Rozza up alive? (SAMPURN)